It doesn't seem fair to go through spring without posting a few "pretty" pictures, so I'm going to give into the urge while I have time and energy tonight.

Since this is a new location and a new garden, I'm still in early days yet, learning what will thrive here, what will just survive, and what just doesn't like this yard.  Hopefully these flowering beauties will all be thrivers. 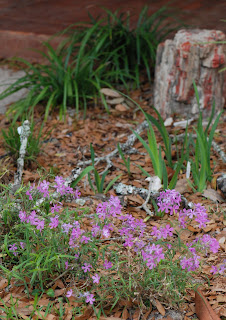 One of the plants that I just put in this spring is downy phlox (Phlox pilosa) that I bought from Dara at 7 Pines Native Plant Nursery in DeFuniak Springs.  We purchased 3 of these at the end of January and planted them the next day.  At the time we bought them, one plant was just beginning to bloom.  The photo above was taken on March 23rd; 3 weeks later, all three plants are blooming as much or more today as they were in this photo.  So, as of right now, these downy phlox started blooming at the end of January and are still blooming strongly 2 1/2 months later!  Not bad for perennials, especially perennials that I haven't dead-headed. 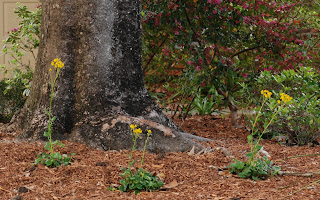 Next on my spring showcase tour are these golden ragwort (Packera aurea), another great purchase from 7 Pines.  These plants were also purchased at the end of January and planted shortly thereafter into very dry shade under a large southern magnolia (Magnolia grandiflora).  So far, they are doing better than I even hoped for. 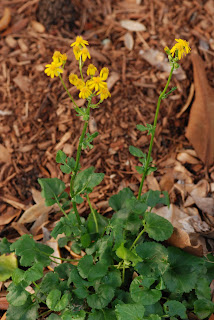 The beautiful little golden flowers started blooming a couple weeks before this photo was taken on March 23rd, the same day the photo of the downy phlox was taken, and they are just now beginning to go to seed.  While I'm tickled about 6 weeks of bloom, I'm most excited about how well the basal rosettes of leaves are doing, as one of my favorite things about these plants is their low, pretty foliage throughout the year.

Hopefully, in a couple years, this entire area will be carpeted with golden ragwort plants.  To facilitate that, I'm going to leave the spent flowers on the plants until the seeds have dispersed.  Then I will cut the stems off and just let the plants function as an attractive groundcover for the rest of the year. 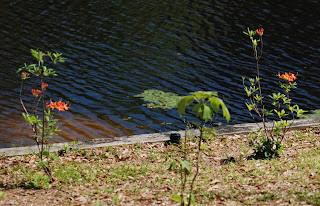 Moving to the back yard, we planted a trio of Florida flame azaleas (Rhododendron austrinum) next to the sea wall about a month ago.  Two of these plants are just moving into full bloom now and I am loving their vivid orange blooms and bright new foliage against the backdrop of the shifting lake waters. 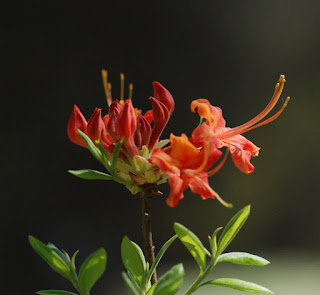 Of course, I love their blooms up close even more!

I do plan to solve the "plants plopped into the middle of grass" issue...but that will have to wait for quieter times, I'm afraid. 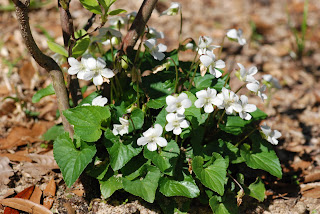 Last but not least, in this little spring tour, are the beautiful little white violets (Viola sp.) that came along with one of the Florida flame azaleas, nestled at its base.  So far I have no species identification for this plant, but I am enjoying its dainty beauty anyway.

As I've written this post, I've realized that I haven't gotten photos of several other blooming plants in the yard, but I'll have to save those for another day.  I hope your spring is bringing you lots of fresh beauty all around!
Posted by Gaia Gardener: at 7:17 PM

Ah Gaia, glad to see you're still around, if southernly displaced. Hope the warmer climate is kind to you.

Ah, thanks, Prof. Yes, I'm still around and getting some gardening under my belt...but time is definitely scarcer these days. It'll ease up, though, and we'll be glad for the memories we've planted.

So odd to have you writing that you planted flowers in January! Looks like you are getting a lot of plant in your new garden. So nice to see what you're doing in the garden.

Thanks, GoSS. For better and for worse, gardening rarely has any down time this far south. In fact, I prefer to garden from October to April here and just cocoon inside during the really hot months.

We've been planting quite a bit, but the yard and gardens feel very barren compared to the gardens we left in Kansas. Time should solve that emptiness, though.