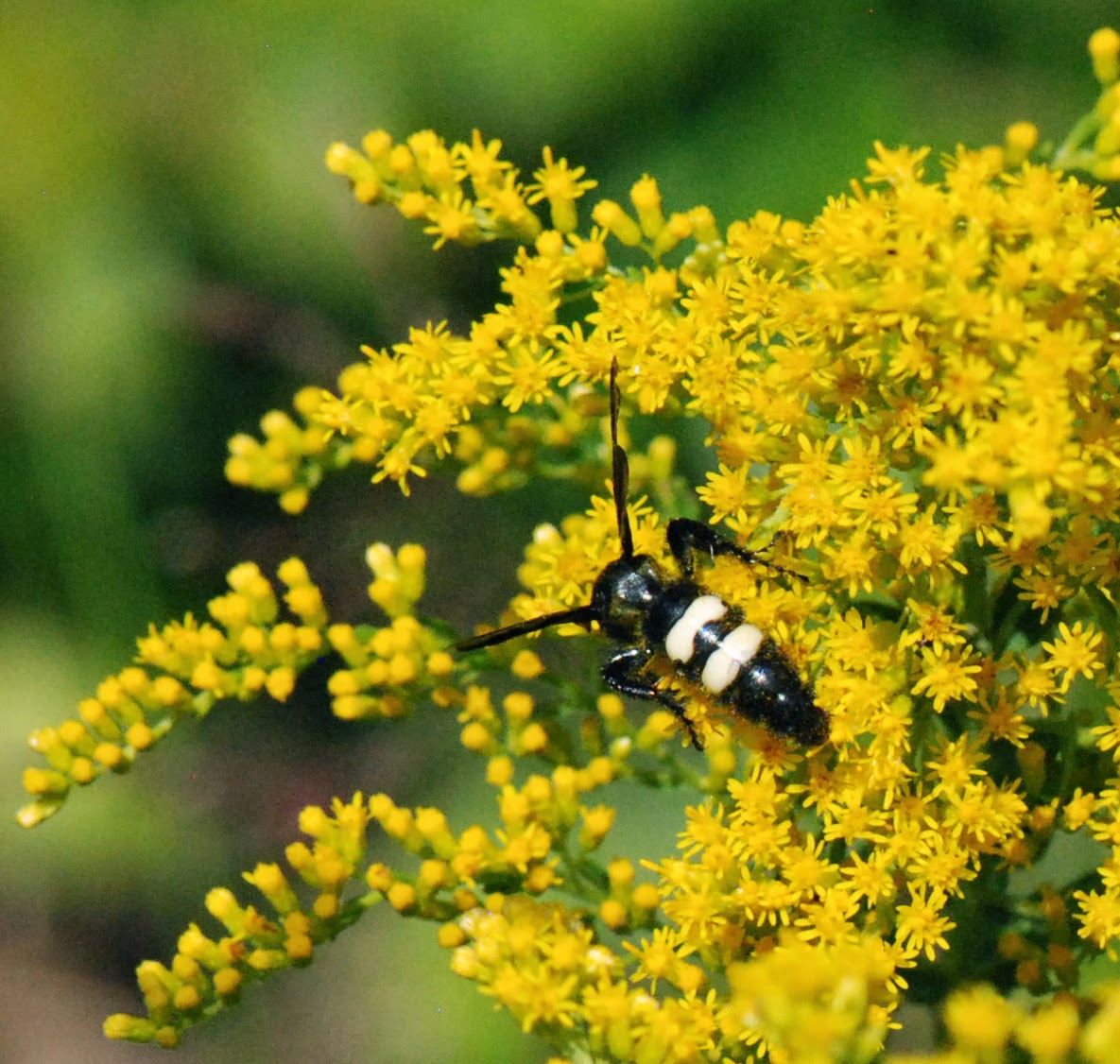 Double-banded Scoliid Wasp.  Scolia bincincta.  What the heck is that?  Won't it sting me?  It looks menacing!

Well, it may look menacing because it's a big, black wasp, but the main animals that scoliid wasps menace are beetle larvae, especially beetle larvae in the ground.  You know, those things in your lawn called grubs?!

Every summer, Double-banded Scoliid Wasps are frequent visitors in my yard, especially to goldenrod and brown-eyed Susan blooms.  I doubt it's a coincidence that I rarely see June bugs any more, no matter what time of year it is.  Apparently, the female scoliid wasps dig down into the soil, sometimes following a grub's own tunnel, find the beetle grub, and then sting the grub to paralyze it.  The female often lays an egg on the grub then - but not always.  Even if the female doesn't lay an egg,  the grub will never recover from being paralyzed and therefore will never mature to reproduce.

Scoliid wasps, it naturally follows, are important predators on June bugs, May beetles, green June bugs, and even Japanese beetles! 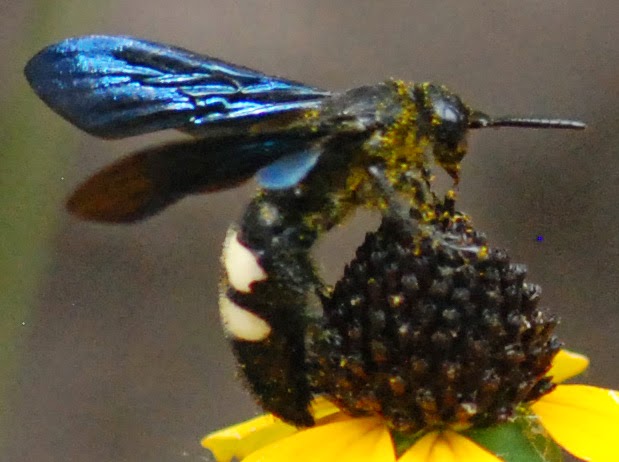 Meanwhile, the adult scoliid wasps feed on nectar and pollen, so they are frequently seen at flowers, which is where I almost always notice them.  Looking at the photo above, you can see the amount of pollen on this wasp.  Not surprisingly, scoliid wasps also act as pollinators, although they are not as efficient at that process as many of the native bees are.

According to BugGuide.net, there are 20 species of scoliid wasps in the U.S., spread among 5 genera, so there's a good chance you, too, can have scoliid wasps in your yard and garden.  Insects in Kansas shows 3 different species, in 2 genera, but there are probably more in our state.

By the way, if this wasp still looks dangerous to you, this is another of the myriad of solitary bees and wasps that won't sting you unless you physically try to hold them in your hand or accidentally step or fall on them.  Scoliid wasps are not aggressive towards humans.

Scoliid wasps are wonderful natural predators.  I hope you discover a species or two of these beautiful animals sharing your garden too!

I adore the solitary wasps...so important in my garden.

You had my hopes up with this wasp and then I found a picture of my own.... it's got two stripes, but only one is on the back part. I doubt it's a helpful grub eating version.
Very interesting none the less, and I should really spend more time figuring out who everyone is that flies through the yard!
Frank

I had never seen this species before...that I was aware...until the one you saw on my post. Aside from being quite attractive, knowing that they parasitize Japanese Beetles makes them now my favorite wasp.

Donna, I think it's awesome that you adore the solitary wasps in your garden! So few gardeners, let alone people in general, understand what interesting and helpful creatures these guys are.

Frank, Your hopes should be able to start rising again. "Your" 2 striped wasp may not be the same species as this one, and it may or may not eat grubs, but I'm learning that most wasps eat meat, especially during their larval stages. There's another 2 banded wasp that lives around here - one band on the abdomen and another at the distal end of the thorax - that stocks its nest cells with caterpillars. Other wasps eat grasshoppers, spiders, or cicadas. I'd be willing to bet your wasp is helping balance insect life in some way.

Steve, I think it's very interesting that we both posted the same species of wasp within such a short time of each other. I've seen the species around here for several years now, but this was the first time I'd taken the time to really identify it and to learn more about its habits.

I photographed the Campsomeris Quadrimaculata scoliid wasp male in my garden in Ocala today. It took a while to identify it, huge as it is, I thought it might be a tarantula killer. They are beautiful! It was enjoying nectar, really enjoying it!

Is there any way these beautiful wasps would live in the wood on your porch?