Last night, at Dyck Arboretum in Hesston, KS,  I had the privilege of attending a talk given by Chip Taylor, of KU's Monarch Watch program.  Dr. Taylor is an insect ecologist and Professor of Ecology and Evolutionary Biology.  He began the Monarch Watch program in 1992.  Monarch Watch is an outreach educational and research program designed to use citizen scientists to learn about and aid monarch butterflies.

It turns out that almost all of the monarchs in the central and eastern portions of North America migrate each fall to one small area in central Mexico's mountains to overwinter.  (The actual site was only discovered by scientists in the mid 1970's.)  There the monarchs cluster on trees at higher elevations, where the temperatures are traditionally cool enough to let them almost hibernate, reducing their need to feed.  In essence, they doze away the winter, then return north in the spring to lay eggs and repopulate our summer meadows and gardens.

At that important overwintering site, scientists are able to estimate the monarch population simply by measuring the acreage that their dense clusters cover.  Since Monarch Watch began, the highest wintering population was in 1996/1997.  That winter, the butterflies covered almost 21 hectares (over 51.5 acres).  This winter (2012/3) the area covered by wintering monarchs was the lowest yet seen:  1.19 hectares (a little less than 3 acres). 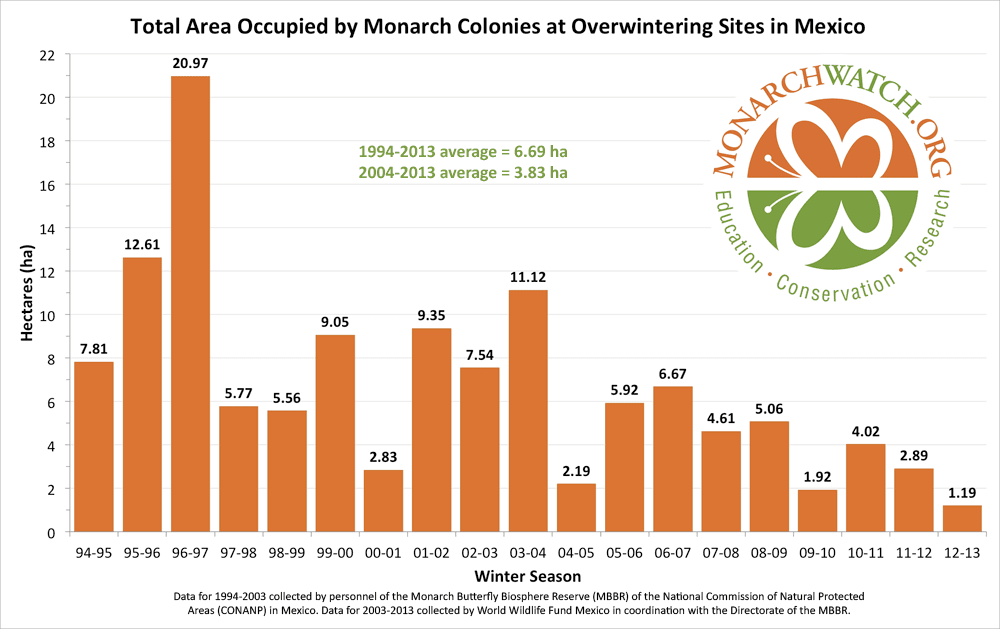 As gardeners, this is where we can make a difference.  Monarch Watch is encouraging all interested parties to develop Monarch Waystations - gardens specifically geared to provide habitat to help monarchs produce more caterpillars as well as to provide them with good nectar sources to fuel their southward migration in the fall.

What would a Monarch Waystation entail?  Area-appropriate milkweeds (there are over 70 species in the U.S.), fall blooms for nectar sources, and NO INSECTICIDES.  (Insecticide will kill the monarch caterpillars, as well as the adult butterfly.)  Spots for puddling and other niceties can be added, of course, but the primary focus is on larval food (milkweeds), fall nectar sources, and freedom from pesticides.

This seems like such a simple thing to do - so I'm going to do it, and encourage others to do the same.  As I learn more, I'll share my journey here on Gaia Garden...and I hope that others who are interested in helping monarchs maintain a stable population will do the same.
Posted by Gaia Gardener: at 5:42 PM

I'm trying to get the milkweed for them. I've found it grows slowly from seed. Last year, my milk week plants were only a few inches tall.
Good info on monarchs. I've heard about the watch program but not gotten much info on it. One of the schools in our city helps tag them as a class project in the fall.

Good post - we need to really spread the word about the importance of planting milkweeds.

I have been growing milkweed from seed for the last 3 years. I have one really nice clump of orange tuberosa. .and 2 clumps of what I think will be purple or white (it was mislabeled and hasn't bloomed yet in the 2 years it is here, but looks definitely to be milkweed) I also planted 4 more clumps from seed last year, and am hoping they will bloom! As a side note, I noticed tonight that the Wild Bergamont we swapped is coming up already. .Score 1 for us and 0 for drought! Thanks again!!

Melanie, I'm excited to know that the wild bergamot is coming up! Awesome!

Thanks, everyone, for your comments. Listening to that talk on Monday really brought home to me how iffy the monarch population has become. The more milkweed we can plant - and encourage others to plant - the better their chances are.