A Toad Unburied...or Jabba the Hutt Comes to Life 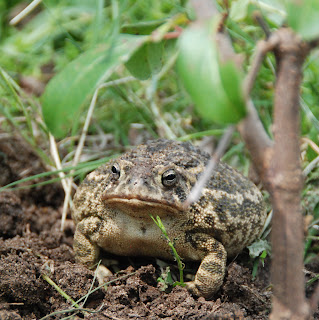 Seriously, doesn't this guy (gal?) look like the perfect actor to play a young Jabba the Hutt as he "expands" in a "Star Wars: The Empire Strikes Back" prequel?  In fact, in honor of the well-rounded figure, I will refer to this individual toad as Ms. Jabba from here on out.


I discovered Ms. Jabba, a Great Plains toad, while hand weeding yesterday to clear out one of my new flower beds in the front yard.  (On a side note, have I told you how much I enjoy hand weeding?!)  She was buried below ground in a newly moistened area where a young shrub had been planted the day before.  Luckily, as I stuck my trowel in the ground to root out some partially buried little barley, I disturbed her but didn't seem to harm her.  She irritatedly hopped off a foot or so, then sat still to figure out what in the world had disrupted her quiet day's rest and what she was going to do about the interruption.  (Incidentally, I recognized and was able to interpret her bleary look based on my own, pre-coffee, morning moments.)

By sitting still, Ms. Jabba inadvertently posed quite nicely for several photographs, allowing me to take shots from several different angles.  One of the most important photos turned out to be of her back, as she started squiggling herself downwards into the wet soil, beginning the process of burying herself again to resume her daytime beauty sleep.


This angle shows the large, paired spots on her back, outlined in cream or light brown.  It is these large pairs of warty dark blotches that identify her as a Great Plains toad rather than a Woodhouse's toad, one of the only two other toad species found in south central Kansas.

Of course, a true photographer always goes for a profile picture too, so in the interest of completeness, here is Ms. Jabba's charming silhouette, taken early in the sequence while she was still sporting the moist soil remnants of her daytime sleep ensemble.


After identifying her this evening by her glamor shots, I looked up Great Plains toads to learn a little bit more about this co-inhabitant of our homestead.

Scientifically labeled Bufo cognatus, Great Plains toads spend their days burrowed into the soil, coming out at night to feed on insects.  They seldom emerge during the day (unless some careless gardener accidentally tries to skewer them with a trowel).  This toad species is considered a prairie dweller, most commonly found in mixed grass or short grass prairies throughout much of the Great Plains and southwest.

The call of these toads is mentioned as being especially loud, long and shrill, lasting for as much as a full minute.  If you visit the Great Plains toad page on the Kansas Herpetofaunal Atlas site, you can hear a recording of the call.  They are considered "opportunistic breeders," breeding in seasonal wet areas such as ditches, ponds or flooded fields whenever conditions are right, from late March to early August.  Only the males call, serenading loudly to entice the females in for a night of amorous activity.  Females, at least in central Oklahoma, can apparently lay as many as 45,000 eggs.  (Wouldn't you love to be the grad student who got to count those?!)  Kansas references mention 20,000 eggs as the maximum number of eggs laid per female.  Whatever the ultimate number each female lays, the eggs are produced in long strings which the male retains for several minutes in a "basket" formed by his hind legs, ensuring fertilization by his sperm.  The eggs hatch in about a week, and from then it only takes the tadpoles 3-4 weeks to become tiny toadlets.

My favorite tidbit of information about Great Plains toads came from the above-mentioned Kansas Herpetofaunal Atlas site:  these toads are apparently voracious cutworm eaters.  Given the large number of cutworms I have seen as I've weeded in my yard this spring, I can only hope that Ms. Jabba expands to twice her current size as she eats her way steadily through the bounty that my yard is so thoughtfully providing her.  May The Force be with her (and her appetite).

Very interesting!! I wonder if those are the toads we hear late at night. .or after a rain. I'll have to check out that site to see! I have been scoping for frogs in my pond. .and so far this year. .zero! Bummer. .last spring Cami and I bought 2 tadpoles. .and noted a single frog to be on the lily pads or the side rock for about a month before it wasn't seen anymore!! By the way, thanks for the info on the false indigo. .I KNOW I would have been disappointed. .now I will not wonder if it doesn't bloom this year either. .next year will be the test!

Great post Gaia, and thanks for the link to the Herp site; I hadn't run across that one.

Do you think the daytime hiding/nighttime activity is an adaptation to hide from snakes? (My post tomorrow is on a garden visitor of my own).

First of all, your side commentary was too cute and funny!
Great info on the toad. Haven't seen any toads here yet but one usually finds a spot in the veggie garden to live for the summer. You got some great glamour photos too.

Gaia, yes they need reservations. Cost is $5.00. The snyder ranch is truly spectacular. And I made a mistake it's June 9th which is a saturday. 620-221-1850 ext 3, Cowley County Conservation Service

Here's a crazy fact. The name "Jabba" sounds very similar to "Zhaba" which is the Russian word for "toad". Guess Lucas must have subconsciously known something when coming up with that name.

Diane, that makes me wonder if one of the writers knew that fact!