If you come across a series of similarly sized holes drilled in one of your tree trunks, and those holes are placed in rather amazingly horizontal lines, you're seeing the work of yellow-bellied sapsuckers.  Often the series of holes becomes quite large, with many layers of horizontal holes drilled in sequence.  Here are two lines of sapsucker holes, not a very impressive display at this point, that have been drilled into one of my honeylocust trees. 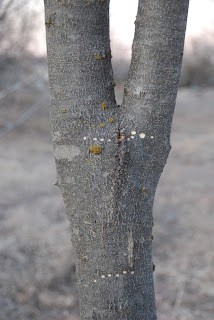 The sapsuckers feed on the sap that flows from these holes.  It is thought that they feed on any insects that are drawn to the sap as well.

Other species, such as warblers, can also occasionally be found feeding at sapsucker "wells."

In Kansas, yellow-bellied sapsuckers are primarily a winter species.  They are rather shy and retiring birds, so often you'll see their holes but never see the birds.  The ones that you do see are often immatures, with very drab, dirty-looking plumage.  They'll assume their flashier, breeding plumage in late winter or early spring, but they may be headed back north by then.

I've seen at least 2 sapsuckers in my yard this winter.  The first is a juvenile (seen here, contesting a starling for access to the suet feeder),... 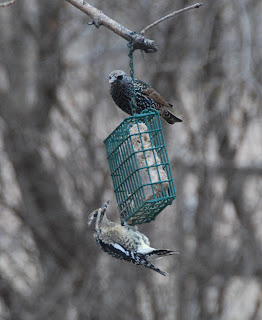 the second one is a male.  (The picture below isn't too clear, but the red - which looks dark - in the chin area of this individual identifies it as a male.)  Of course, I could be seeing more than just two individuals, but it's hard to tell unless I see them together. 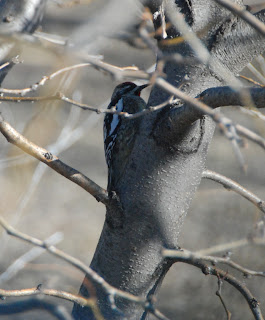 Although sapsuckers can make a lot of holes in a tree, this usually doesn't seem to harm the trees. It may be more of an issue in the northern country where sapsuckers breed, but in Kansas, I haven't heard of any issue.  So far this winter, I've only seen holes in my honeylocust trees, but there could certainly be feeding going on in other trees that I simply haven't noticed.

Sapsuckers certainly aren't rare in Kansas, but they're uncommon enough that I always get a little thrill to see one.  Having two is especially interesting this year!

How fun!! I once saw holes like that in one of my elms. .we weren't sure what did it, but figured some sort of bird. You have got quite an amazing conglomeration of birds there!! Good for you!!