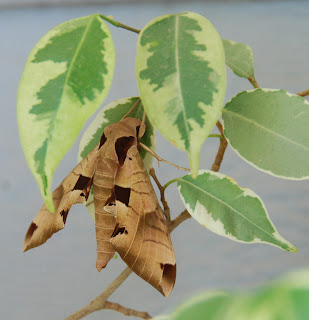 If ever a moth could be considered classy, I have to admit that this guy would be in the running. He (she?) is an Achemon Sphinx (Eumorpha achemon) that I discovered hiding in my Ficus on the front porch the other day. Phlox are among the flowers they prefer for nectaring; so I assume it had been sampling mine and got tired enough to hole up for the day.

Look at the cool way the color shading on the rear margin of the front wing makes it look curled up, like a dried up leaf. (That seems pretty appropriate for this summer!) The hind wings have a great deal of pink on them, but I didn't want to disturb this one to try to get it to strut its stuff for the camera.

Before you get too irritated - I, too, had to look this moth up to identify it. I learned (not surprisingly) that Achemon sphinx is in the same family as the tomato hornworm, but that the larva of this moth feeds on Virginia creeper, grape, and other closely related vines, rather than on tomatoes. It is relatively rare to see the caterpillar, but apparently it looks very much like a typical hornworm, except that it loses its horn as it matures and develops a big eye spot on its hind end instead.

Now that I know they should be there, I'm going to be on the lookout for the caterpillars on the grape vines and Virginia creeper around the yard. I'd like to get a look at that eyespot in person! Meanwhile, I've learned about another fellow Earthling sharing our space. That's always a good thing.
Posted by Gaia Gardener: at 5:39 PM

What a beauty. I'd love to see one in person. I hope you find the catapiller.

Thanks! Isn't it gorgeous?! If I find the caterpillar, I'll try to get a good enough photo to post.