Funny how sometimes serendipity places the same thing in my way over and over again, in close succession. Today it was that way with egg masses.

First, as I was pruning out some eye-pokers on the new trail that Prairiewolf mowed for us in the draw, I found an egg mass glued on the underside of a branch. The entire mass was about 1/2" in diameter and consisted of about 100 small eggs, each almost 1/4" tall, arranged in a honeycomb pattern. The eggs were columnar in shape, black bodied, with a cream colored, round top. 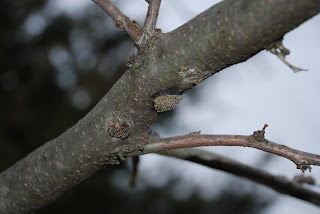 As I was finishing today's pruning, this time working on the honeylocusts along the driveway, I came across 2 more of the same sort of egg mass. You can see one of those egg masses in the center of the photo to the left. A closeup of the egg mass is below.


Finding this many egg masses of the same kind made me suspicious, so I decided to do a google search when I got a chance. THAT many eggs makes me nervous about a pest species. Tent caterpillars sprang to mind.

Before I had a chance to check out the internet, however, I was moving a pile of small cedars that I had cut out of the back pasture earlier today. I noticed that 2 of them had preying mantis egg cases glued to the underside of a branch. Needless to say, I put those 2 cedars aside so that I can salvage the egg cases before we burn the remains of the cedars.

Finally this evening I had time to search for the identity of my mystery eggs. Tent caterpillar egg masses didn't match at all. The only other insect I could remember seeing on the honeylocusts were wheel bugs, so I looked up their eggs. Eureka!!! That is indeed what they are.

Which is wonderful! Here is a photo of a pair of wheel bugs that I saw last September, patrolling a honeylocust while getting ready to lay one of those egg masses. They are about an inch long each. The male is on top, the female (with the swollen abdomen) below.
Wheel bugs are voracious predatory insects, about 1 1/4" long, with appetites resembling preying mantises. They get their name from the wheel-spoke-like half moon structure armoring their thorax. Once you see one, you won't forget it! Don't pick them up, however, as they can administer a painful bite with their sturdy sucking mouthparts (called a beak).

I had to remove the honeylocust branch with the 2 wheel bug egg masses, so now I have to find an appropriate site to stash it where the young wheel bugs will have a good chance for survival when they hatch out this spring. It's so much fun to make discoveries like this in the yard!
Posted by Gaia Gardener: at 5:41 PM