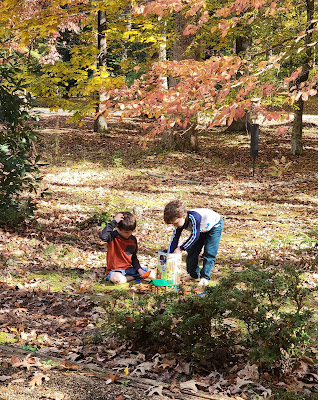 Richard Louv's important book, Last Child in the Woods, was written in 2008 and brought attention to the reality that few children actually get to spend much time playing freely outdoors.   It sparked a subset of parents and other adults who have been trying to encourage families to get their kids outdoors in nature.  Unfortunately, it's seemed (from the outside, at least) like a bit of a slog, fighting through the mud that is the way our society is currently set up - barren yards full of chemicalized lawn and non-native plants, schedules jammed with activities that require all of our highly scheduled time and attention, parks given over to sports' fields rather than natural areas, and a general distrust of free time as "unproductive", the ultimate sin in the U.S.

When I was in elementary school, I spent days...weeks... months exploring the woods and creek near our home in College Park, Maryland.  There were tadpoles and crayfish to try to catch, minnows and frogs to watch, and many, many special places where my imagination could run wild.  The holly glade magically hid me, the tiny islands became my kingdoms, the paths (deer?) became trails leading me to new lands.....  When we moved to Massachusetts, I continued playing in the woods but I was getting a bit older.  Now I had a favorite log on a hillside overlooking a pond where my best friend and I would go after school to talk and just generally try to figure out life.  I led a band of neighborhood kids in catching toads and keeping them, naming them and "training" them to race in sandbox toad races such as high jump, long jump, and speed or distance trials.  (What can I say?  I knew I'd never have a horse;  maybe this was scratching that itch!)

In junior high, in the Panama Canal Zone, I tried my hand at gardening (I was awful at it) and explored the sea shore as much as I could, bringing home hermit crabs and other sea creatures to form my own attempt at a personal zoo.  Sadly, coming home with me was generally a death sentence for the poor animals, but I tried my best to provide good habitat and food for them.  Gerald Durrell's My Family and Other Animals, which my maternal uncle had introduced to me, was one of my favorite books - and a real inspiration.  More mundanely, I collected shells, too.  A lot of shells, which I carefully worked to identify and which I housed in cigar boxes, grouped by "type": moon shells, pen shells, scallops, whelks, cowries, etc.  I wanted so badly to be a marine biologist...but our next move was to Kansas and I didn't know any marine biologists.  How did you actually make a living as a marine biologist?  My courage and my imagination failed me in figuring out how to step in that direction, and life soon led me in other directions.

All of this is to say that playing outside, freely and with little oversight, was incredibly important to me and was influential in forming the person I became.  Greg and I were able to give our kids a taste of that freedom in the natural world, too, when they were in late elementary and middle school.

And now we're trying to give the gift of free play in nature to our grandsons as well.

It's a goal that seems to get harder with each generation.  If my parents worried about where I was while I was gone for most of each day, playing in the woods, I was unaware of it, and the wild area was right down the street from where we lived.  I walked there.  When our kids were playing outdoors, we lived in farm country and they were able to ramble through a wooded draw behind our house and through a neighbor's cow pasture.

Where do kids play now?  There are few natural areas left where they can roam and wander at will.  There's so much fear about "danger" that parents actually get prosecuted for letting their children roam freely.  (Or, at least, that's the story we're told.) 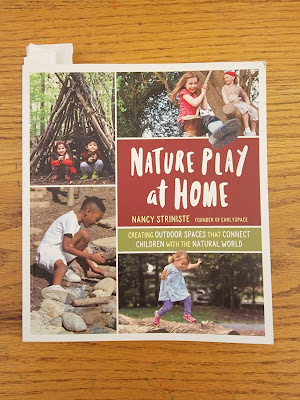 So I'm working to make our personal landscape an interesting natural area for our grandsons to explore and play in.  I've come across a wonderful book by Nancy Striniste, Nature Play at Home, which has a plethora of great ideas for changing your yard from bland to fascinating.   I highly recommend it if the topic interests you at all. 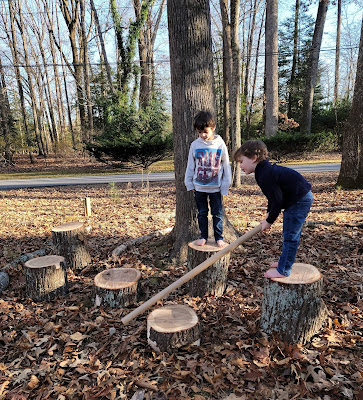 When dead wood was trimmed out of our trees last month, I had the tree service leave the major branches and trunks.  One of the things I've done with that dead wood is create play areas for the boys in our yard. 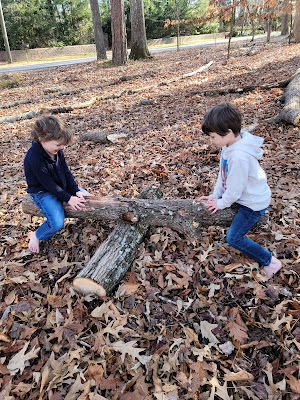 Good habitat for people AND animals. 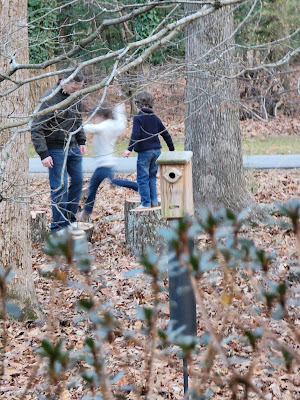 Even their dad has gotten in on the action! 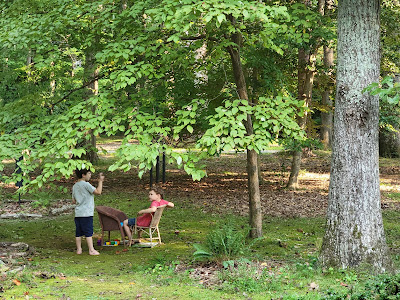 Bare feet are the norm for the boys, not the exception.  In fact, it's hard now to get them to wear shoes, even in cold weather.  Talk about "grounding"! 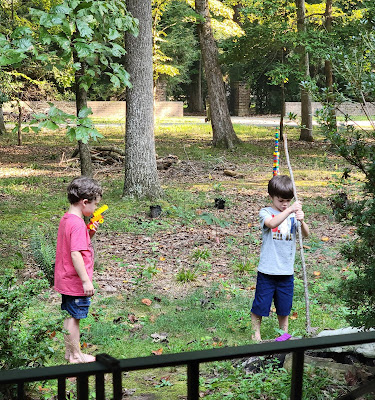 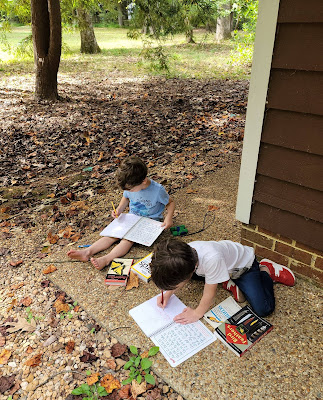 My heart truly swelled with happiness and pride the day that the boys came outside, on their own, with notebooks, guidebooks, binoculars, and pencils to "study nature". 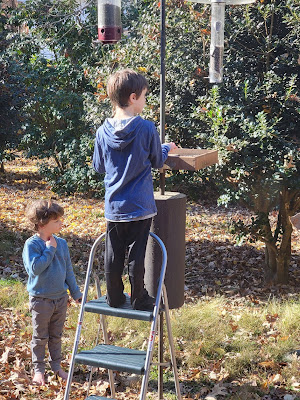 They are not always successful in their endeavors - patience was not their strong suit as Connor tried to entice birds to eat out of his hand.  But that's part of the learning. 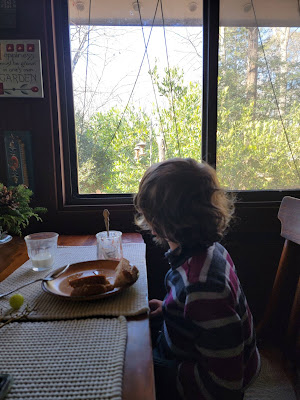 Even meal times have an element of outside nature for all of us, as we watch our bird feeders from the table on the back porch.  The boys have become excellent birders.  For example, it was our older grandson who first noticed the immature male Baltimore oriole feeding on the bark butter feeder a few weeks ago.  I'm not sure I wouldn't have quickly glanced at the bird and dismissed it as the pine warbler that had been frequently visiting.  I never expected a Baltimore oriole in January!

In other interactions with animals, we and the boys watch fireflies at night in the summer - last summer we noticed 3 different waves of them: one in April, one in mid summer, and one in early fall.  The April fireflies seem to stay 30' or more above the ground.  I've even found the firefly larvae occasionally as I weed.

We planted around 30 swamp milkweed last spring and we watched for monarch caterpillars all summer long;  we did find a few and we're hoping for more next summer.  Our plants are still young.  We've found large numbers of black swallowtail caterpillars on parsley, enough that we've had to hit the grocery store for organic parsley when the hungry hordes decimated the plants they were on.

Late this summer, a box turtle wandered through the front yard - the first one I've seen in our yard in 2 years.  We see skinks and a few baby toads.  The boys haven't shown any interest in toad races yet, though!

I hope we're building happy memories for them, strongly grounded in the natural world, that will last the boys for a lifetime.  Most importantly, I hope we're helping to create a new generation that cares enough about the Earth to help care for it in the future.