Elephant Mosquito: The First Mosquito I'm Glad to Find in Our Yard!

It's hard to decide what I love the most:  photographing insects and other animals around my gardens or identifying the insects I see and then learning about how they fit into the patterns of life around me.

Once again I want to sing the praises of BugGuide.net and its community of volunteer entomologists for their help and expertise.

A few days ago I was doing my afternoon walkabout, using my newly "discovered" tripod, and capturing the images of just about any animal I could find.  One of those animals was a fly that looked suspiciously like a very large mosquito, over 1/2" in length.  Thanks to the tripod, I was able to get a reasonable series of photos and look at the little beastie with a more discerning eye. 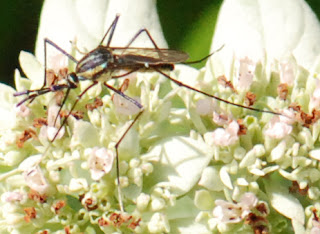 As I took the photos, one thing I noticed with my "naked eye" was that, as it fed, the insect seemed to be signalling by raising its hind legs, first one side and then the other, showing off a white "bootie" on the end of each leg. 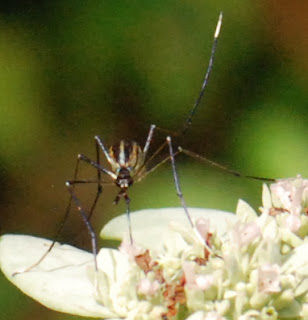 Since the signalling was done slowly and methodically, I was able to capture pictures of it without trouble.  As I looked at the photos, though, I was not a happy camper.  Damn.  Despite all my mental attempts to make this animal into a non-mosquito-type insect, the images revealed that it simply was, indeed, a very large mosquito.  "That's all we need here in the yard," I thought, "an extra large mosquito joining the ranks of the more normal sized, always-seemingly-hungry, stealth mosquito squadron." 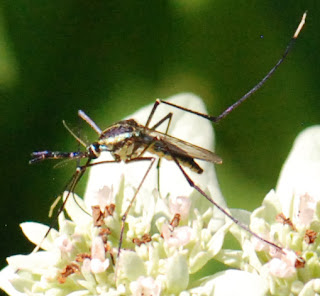 However, this mosquito, which appeared to be a female due to its non-feathery antennae, was obviously feeding on the nectar in the mountain mint flowers.  Hmmmm.  Was that normal?

I tried wading through the images of mosquitoes on BugGuide to learn more, but I simply wasn't getting anywhere because I really didn't know what features to focus upon.  So I asked for identification help earlier today.  Within a few hours, I had my answer - and what an answer it is!

My giant mosquito is known as the Elephant Mosquito or Treehole Predatory Mosquito.  In scientific parlance, that's Toxorhynchites rutilus.  As larvae, these mosquitoes are actually predators on other mosquito larvae!  Best of all, the adults feed at flowers, as mine was doing, and the females do not appear to require a blood meal to lay eggs!  I didn't have the slightest clue that predatory mosquitoes existed, so this has really made my night.

What a truly marvelous world we live in!
Posted by Gaia Gardener: at 9:24 PM

Thank you for posting this. It's very interesting. Now I'll have to start looking for Elephant Mosquito's.

You have just changed my entire opinion on the mosquito family, I never knew a bug like this existed! Amazing.

Sandra, thank you for stopping by! It feels strange to say that I hope you'll find a mosquito - but I DO hope you find elephant mosquitoes in your garden!

Hi, Frank! Thanks for stopping by. I never knew a predatory mosquito existed either, which is why I wanted to shout the news from the mountaintop, so to speak. For better or worse, here along the Gulf Coast we certainly have plenty of food for them in their larval stage!