The Sap is Rising...and the Sapsuckers Are Visiting

Three days ago I noticed a pair of woodpeckers fly over to one of our pignut hickories (Carya glabra).  These deciduous trees are always late to leaf out, waiting until the azaleas are basically done blooming, most of the spring bulbs are finished, and the laurel oaks (Quercus laurifolia) have lost their old leaves and regained fresh, new ones.

We have 3 reasonably good sized pignut hickories in our backyard.  As a group, they are a great advertisement for the benefit of open-pollinated, seed grown trees:  none of the three does anything at exactly the same time as the other two.  These three trees leaf out at different times, develop fall color at different times, and drop their leaves at different times.  For a while I even began to wonder if they were actually three different species! 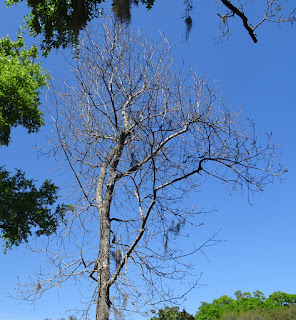 The big, terminal buds of the tree that the woodpeckers chose this weekend are swelling and just starting to break open.  The other two "sibling" hickories are still quiescent.  I'm not sure I would have noticed the changes in this tree if the woodpeckers hadn't shown up....

But show up they did - and they put on quite the show for several hours.  My first, fleeting impression was that this wasn't a pair of red-bellied woodpeckers, which are our common species here.  I've also seen downy woodpeckers and northern flickers in the yard, but this pair was obviously too big to be the former, too small to be the latter, and too "blandly colored" to be either of those species anyway.

So I got my binoculars and took a closer look.  A pair of yellow-bellied sapsuckers!

At first I thought the two were mating.  They would climb up the tree trunk almost in tandem for a while, then one would jump the other and they would tumble head over heels, dropping from 10 to 30 feet, hitting branches as they dropped.  Eventually they'd disentangle, right themselves on the trunk, and start climbing up again.  This went on over and over again, for several hours.  I presume they took breaks from their acrobatics, but I wasn't able to watch the entire time, so I don't know for sure.

Finally, in the early afternoon, the male flew away and I haven't seen him again.  The female remained on the tree, though, and was there again all day Sunday, busily tapping away on the trunk.

I don't have any photos of the pair, as I didn't want to interrupt their "dance" by getting too close.  I was able to get some photos of the female on Sunday as she worked on digging her sap wells and I worked on weeding the garden bed nearby. 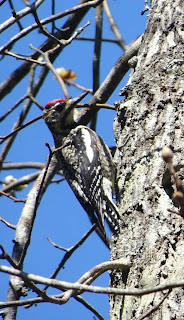 I've since decided that this pair was probably fighting over food, not mating.  Yellow-bellied sapsuckers don't nest here - their breeding range is much farther north.  I don't think they'd actually be copulating this far south, long before they've completed their spring migration and found a breeding territory, let alone constructed a nest.  I think the sap is rising in this individual tree, based on the swelling buds, and these two birds were simply fighting over whose "territory" it was going to be while that was going on.   They just happened to be a male and a female.

Now it's going to be interesting to see if any sapsuckers stay around to feed on one of the other two hickories in the yard, as their sap starts to rise and their leaves unfurl later in the spring.

How can anyone get bored in a wildlife garden?!

Cool observations about the trees and the birds! I should look up information on the birds we see here. I know some stay around in all seasons, and others do not. I don't know where they go. Now, I am curious.

Witnessing events like this in nature is such a thrill. All it takes is being outside and paying attention. So few people do that anymore. You don't have to go to a wilderness area to observe amazing views of nature.

Sue, Birds were sort of my "gateway drug" into gardening!

Gene, you are exactly right! It is amazing how much I see simply by quietly being outside for longer periods outside.

A great description of something that most people would miss, and I like to hear that I'm not the only one who will sit and just watch the comings and goings of the garden for what seem like hours... almost lol
I think hickories are awesome trees. A shame that red maples and pears are about all that gets planted around here.

Hickories are great trees and I am constantly amazed at how many animals I see "using" the 3 in our yard. They are also good to garden under, as their roots tend to go deeper than many other trees, leaving some root space for an understory layer. Luckily, these three were probably left when they cleared the lot many years ago - or else they seeded in and came up naturally shortly thereafter. I'm sure glad that we have them, however they got here.

My gosh what a show. We're enjoying some different birds on their way through too. Love all the spring activity.

I love your last comment. I am never bored when outside.