With many apologies to Robert Louis Stevenson,

"I have three "little" shadows that go in and out with me.
And what can be the use of them is more than I can see." 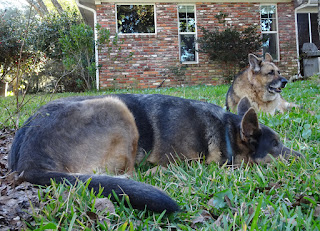 As I garden, I usually have a faithful entourage, albeit a rather hairy, sometimes smelly, one.  With the passing of our dear cat T.J., I am now sadly reduced to three "shadows", but what great companions they are - and how loved, warm and protected they make me feel!

Becker is the eldest...and the largest.  We got him shortly after Katrina, after my dear old girl Annie passed away.  The 7 week old pup that fit on my lap coming home grew up a little bit!  Ummmm, perhaps MORE than a little bit, topping out at close to 150 pounds "back in the day."  He's 11 1/2 now and beginning to slow down, but he's still as bright-eyed as ever. 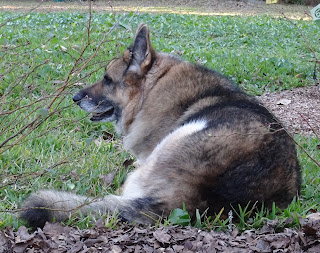 Next in size is Blue, whom we adopted as a 16 month old "wild man" several years ago.  He'd been confined to a pen in the middle of his owner's backyard and he was quite vociferous about that indignity; I could hear him from blocks away when I went to meet him for the first time.  While kennel-bound, Blue apparently decided that it was his divine duty to keep the world safe from cats and squirrels, but the fence kept him from carrying out his appointed duties.  When I brought him home the first time, he hit the ground at a dead run, ears back and ruff up, to take out one of our cats.  I seriously questioned my sanity in bringing him home at that moment, but Blue learned quickly to accept our pack members.  He's a loving and important member of our family now.  Woe betide an unwary squirrel, however, or a cat that doesn't "belong." 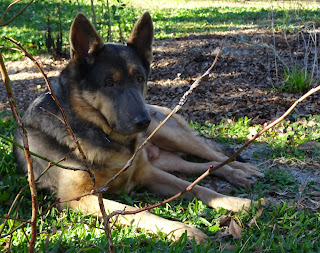 Smallest of my garden guardians is Bella...but she is mighty in spirit!  Bella is another refugee, abandoned by her original owners when they moved.  At that point, Bella adopted our daughter, bringing along her 2 half-grown kittens.  When Jess tried to keep Bella inside, though, Bella made it quite clear that she is a free spirit and would not be confined.  Lo and behold, Bella ended up taking residence with "Mom and Dad', on our 10 acres in Kansas.  She's been a good sport about the move to a more populated area, but she still much prefers the out-of-doors, despite my open door policy.

(Note:  For the sake of the wildlife, I would  MUCH prefer that Bella - and all cats - be kept inside, but Bella has very strong opinions about that concept and makes herself abundantly plain about what she considers acceptable.  As often seems to happen, I have learned to compromise....)

I hope you have gardening companions every bit as loving and loyal as mine - and perhaps even a little less likely to break off or otherwise destroy a plant when they inadvertently step on it.  I try to keep an open mind, though, and think of the "pruning" that is occurring.  At any rate, I consider the occasional, accidental loss of a plant well worth the companionship.
Posted by Gaia Gardener: at 7:03 PM

Sorry to hear about T.J. Sure looks like you have a well rounded fur family there.

I have a very loving fur family, for sure, GoSS! And life would feel much emptier without them.

Oh that Florida grass...so different than I was used to seeing from you a few years back. Hi Gaia!

Prof, your comment made me laugh a bit. I hadn't given a thought to the grass we have here, compared to the grass we had (and worked to establish) in Kansas! I'm just not a lawn gal, generally speaking. The main two types that grow well here, along the Gulf Coast in Florida and Alabama, are centipede and St. Augustine. The grass in these photos is (weedy) St. Augustine. It tolerates shade much better than centipede, plus we inherited it when we bought the house.

Hope this year's gardening weather is more productive than last year's was!

I have two shadows that follow me too, Maddie and Tap. Maddie is getting old, and I worry about her sometimes. Loved reading about your shadows.~~Dee

I have two shadows that follow me too, Maddie and Tap. Maddie is getting old, and I worry about her sometimes. Loved reading about your shadows.~~Dee

Are Maddie and Tap dogs, cats, or one of each? Garden shadows are such good companionship as I'm working. I'll look forward to reading about yours on your blog.