Moving to a suburban lot that's been "civilized" for over 50 years, I wasn't really expecting any native wildflowers except those, like violets, that can often be considered "weeds".  I've had 2 pleasant surprises, one of which is Elephantopus tomentosus.  (Note:  I hate both common names, so I think I'll just stick with the Latin.)  The other surprise was a goldenaster, but I'll write about that plant later this fall, when it blooms.

Shortly after we moved in last summer, I actually noticed a couple of these unassuming little wildflowers growing at the edge of a city easement along one side of the back yard.  Their dark green, flat, almost velveteen-looking basal leaves were interesting, but the wispy little flowers that seemed to fade before I made it out of bed in the morning were disappointing.  I identified the plant and then basically ignored it. 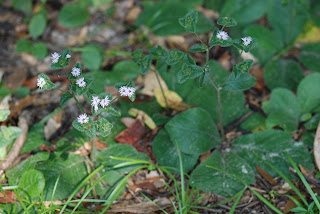 Over the course of the year, the population has grown from 2 or 3 individuals to about a dozen.  Most are in the same area where I noticed the original ones, which is still an overgrown and abandoned strip of land above a storm drain pipe.  A couple individual plants have popped up in the lawn, now.  Their flower stalks get mowed off weekly, but the basal rosettes are still dark green and attractive.

Then I started feeding our cats first thing every morning.  The cat food is right beside the Elephantopus corner and I started noticing that their light purple, aster-like blossoms were actually quite attractive, held so staunchly a foot above the ground and carefully framed by three miniature versions of the basal leaves.  On a couple days, I went out several hours later to photograph them, only to find that the blooms had already closed.

Finally, stumbling out in my pajamas, with camera in hand, I managed to capture a few in full, morning bloom.  They look like miniature boutonnieres, all ready to be harvested and pinned on some fairy gentleman's coat lapel.  Still not spectacular flowers, but quaint and dainty and very appealing, in a quiet sort of way. 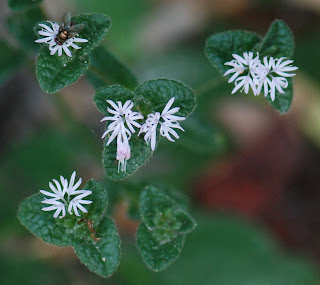 Appealing, unlike this plant's common names, which returns us to one of my chief frustrations about this plant.  The name "Hairy Elephant's Foot" is supposedly given due to the large, flat, basal leaves which apparently resemble elephants' feet to some folks.  (Their footprints, maybe?)  Hairy, because the stems and leaves are fuzzy.

This plant's official common name, however, is Devil's Grandmother, according to the USDA Plants Database, and I can't for the life of me figure out why.  To my knowledge, this plant has no spines or horrible odors or other devilish qualities to it.  Some sources suggest that it is toxic;  others say that it can be used as an analgesic and anti-inflammatory.  Nothing too unusual there.  For Pete's sake, azaleas are toxic, among many, many other plants, and willows are the original source of aspirin.  So why Devil's Grandmother?  If anyone knows, I'd love to find out the story here.

Meanwhile, I'm just going to get quiet pleasure each morning as I feed the cats and look at the dainty little fairy boutonnieres, held high for my viewing pleasure.  Several sources mentioned that insects love these little blooms, too.  The fly in the photo above certainly seemed to be content.  I'll be watching to see what other insects might come calling as well.
Posted by Gaia Gardener: at 7:08 PM

Janet, The Queen of Seaford said...

Hooray! So glad you posted this. I love this wildflower. Funny we both have it.

Janet, I was tickled to see your photo the other day. (Week? month? - time with a toddler is warped.) I think it is very cool that we both have it. I wouldn't have thought it was that widespread. Cynthia

What a sweet flower.

Thanks for this! I will have to get up early to see if ours have flowers too. Like you I'm wondering why the evil name!!

Thanks for your post. I was having difficulty identifying this!

As for the name Devil's Grandmother, after doing a bit of research, it possibly comes from the fact that in folklore (especially European/Russian) the devil's grandmother (as in the grandma of Satan, not the flower), was said to be covered in fur, and was believed to put curses on things to make them break, not work, etc. If something broke or didn't work, it was attributed to the devil's grandmother. The leaves on this plant have "fur," and they negatively affect the arability of land (a curse, in a way). It's a thought...

I have them here in middle Georgia, around the edges of the woods, but also a few in the lawn area. The flowers are long-lasting and stay open throughout the day, even in the afternoon sun.

I, too, have been wondering why it's called "Devil's Grandmother", and I haven't been able to find out anything. I have one theory, though. Some sites mention that it is a good ground cover and can really take over. Some people really would not like that!! Maybe it gets into their gardens, etc. So, I wonder if there's some old expression like "Well, isn't that the devil's grandmother!" and it got applied to this by someone who didn't like the habit or the plant. I don't know if that's a far-fetched theory!! Has anyone heard that expression used, in general?

So happy to read this! I just found to in my yard, was glad to find it is a flowering native but really curious about the name. It seems that often common plants that are close to home and free are considered worthless but there is so much abundance from nature that doesn’t need to be bought, it just needs to be uncovered and given room to grow