The Arrival of Winter - A Sign of the Season to Come?

Well, winter suddenly descended last week with a blast of strong wind that was followed a few days later by a thin blanket of snow.  This was enough of a shock to my system - I'm very thankful I don't live in south Buffalo, New York, right now!

While nothing too exciting has happened with this seasonal change, above and beyond earlier-than-usual cold weather with a couple inches of snow, it still seems like I ought to celebrate the arrival of winter with a brief post.  So here goes.

Since there was little transition between the relatively warm fall weather and a cold snap more typical of January than mid-November, quite a few trees and shrubs were caught with leaves in place.  Thankfully, we didn't get ice, so the leaves simply freeze-dried in place.  Some species, like cottonwood, have gone ahead and shed the remainder of their leaves.  Others, like the oaks, are still sporting a green coat. 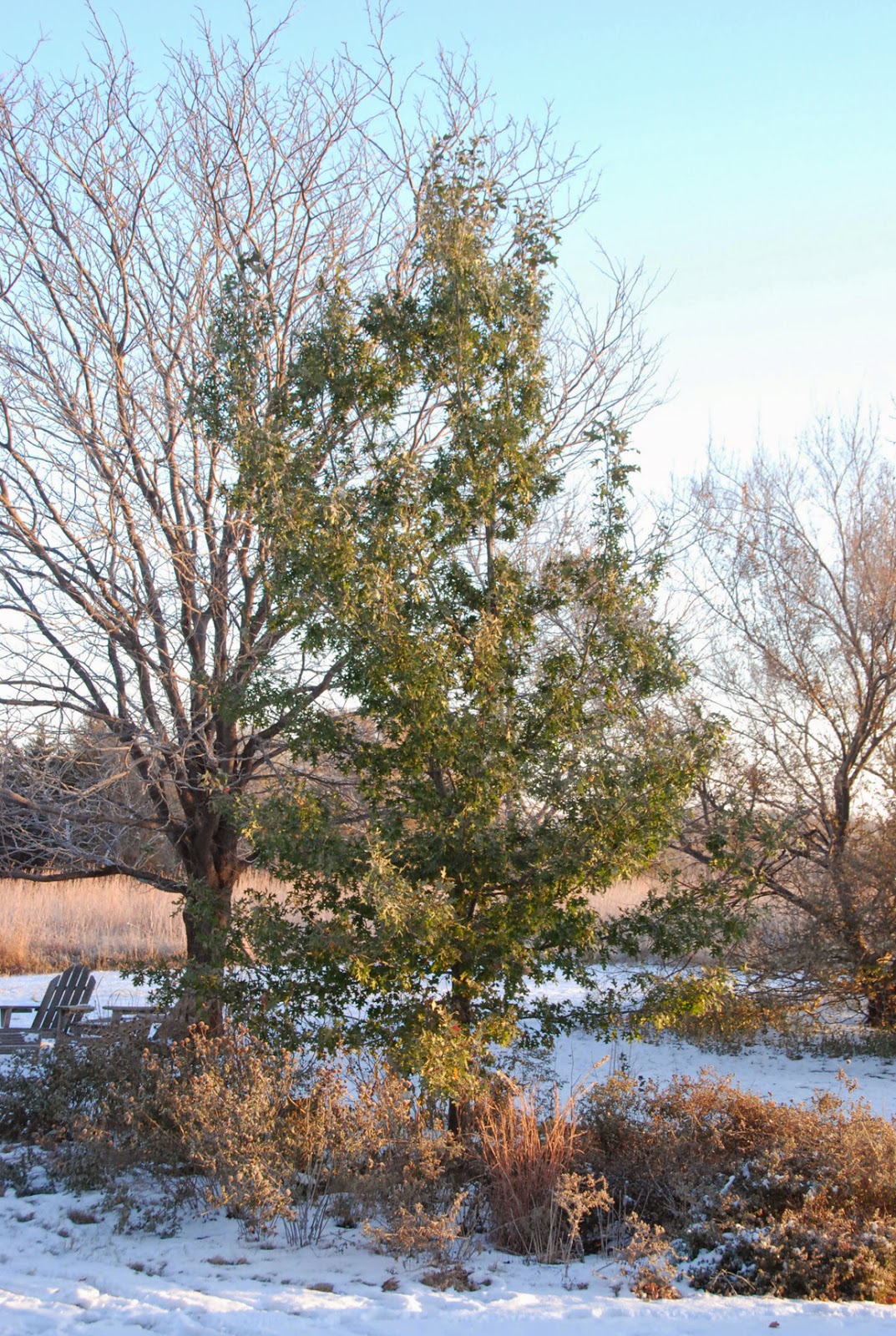 This is the young Shumard oak that we planted shortly after we moved in.  I wonder how long the leaves will stay green this winter? 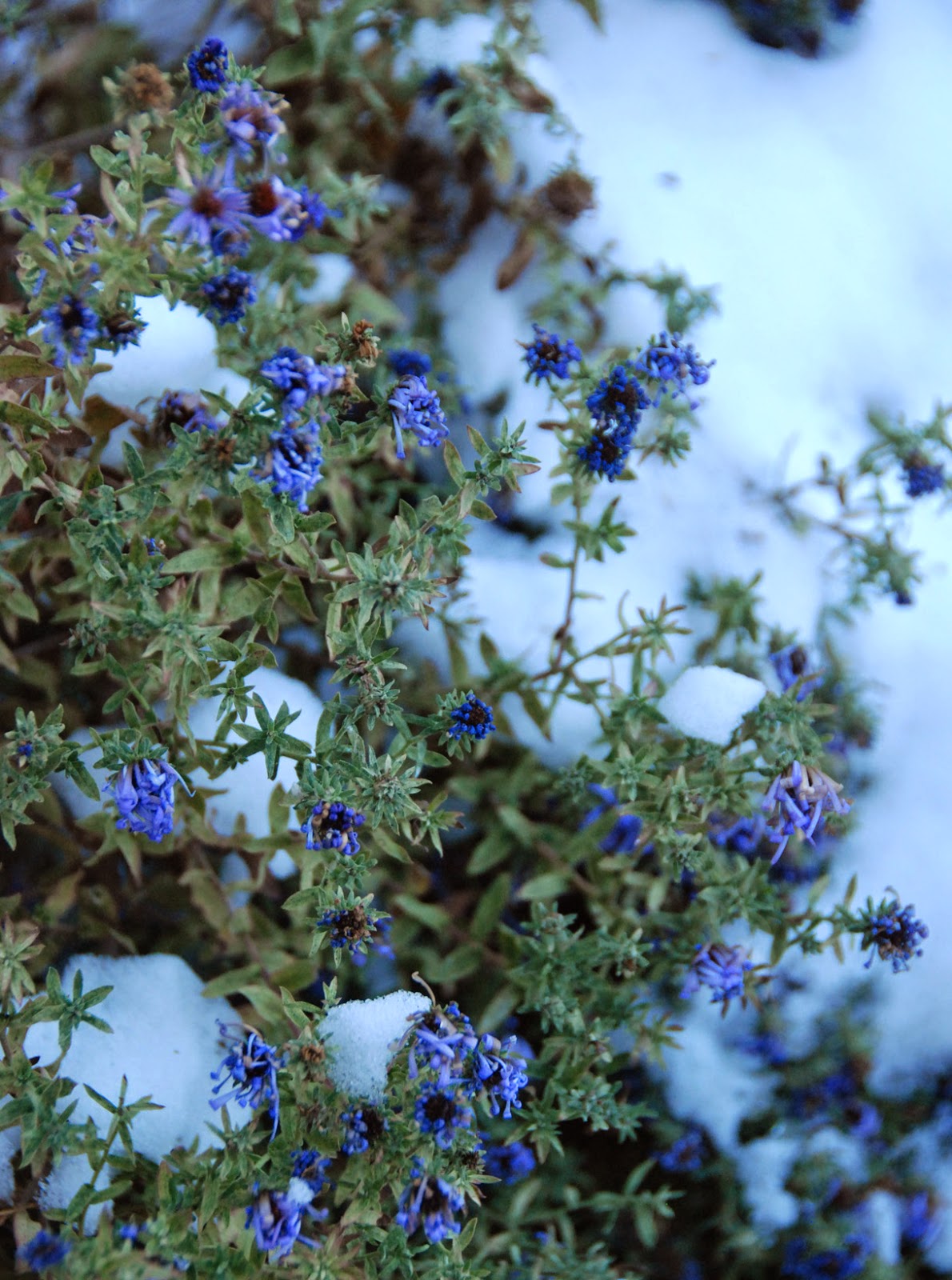 My aromatic asters were also still blooming when the cold hit.  Despite their late bloom cycle, this is the first year I've noticed any of their blooms getting caught by winter weather.  The purple is still obvious, 10 days after the cold originally hit.  How long will I have purple "blossoms" coloring the winter landscape? 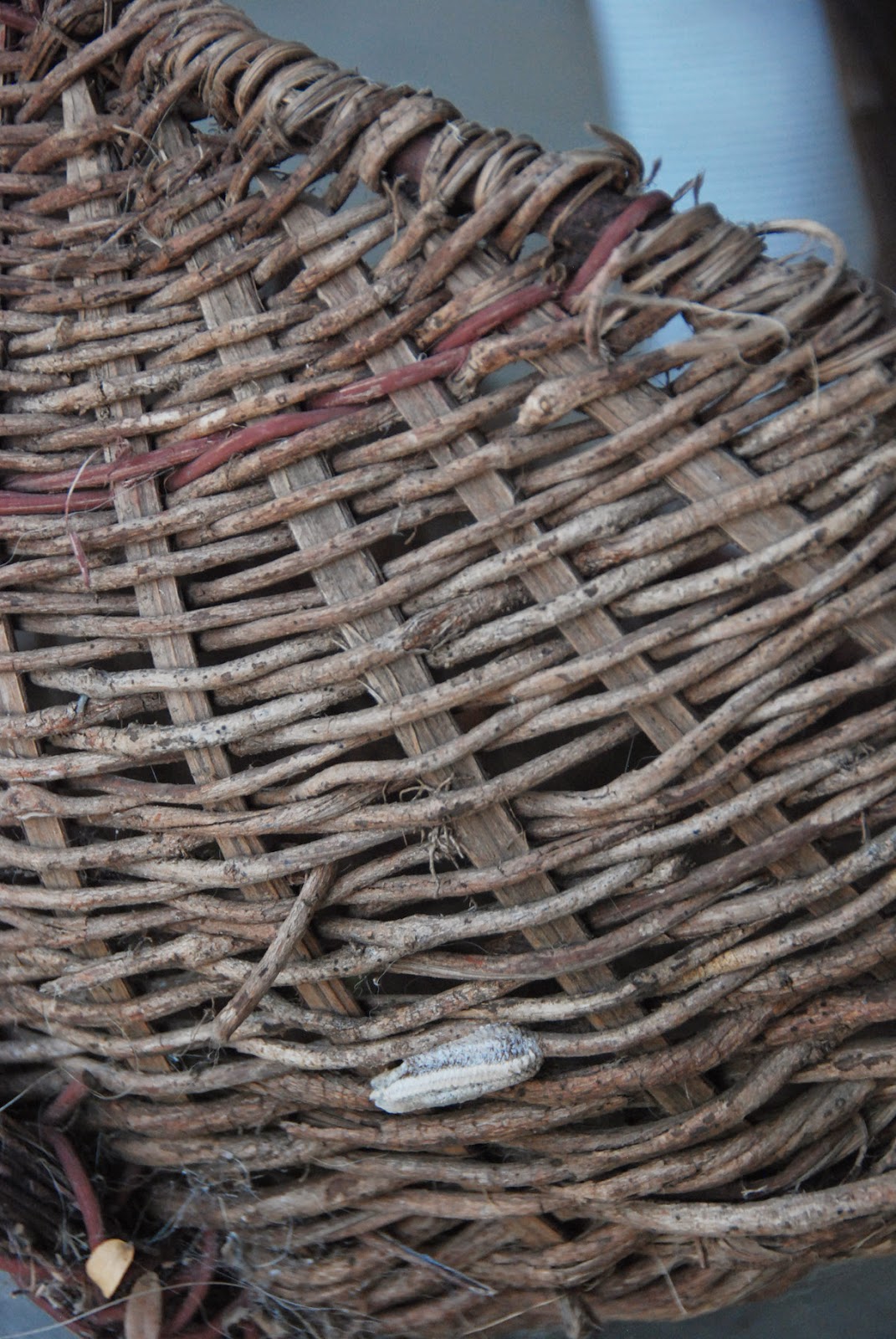 After snapping a few pictures of the asters, I noted this grayish "growth" on the side of a basket sitting on the front porch. 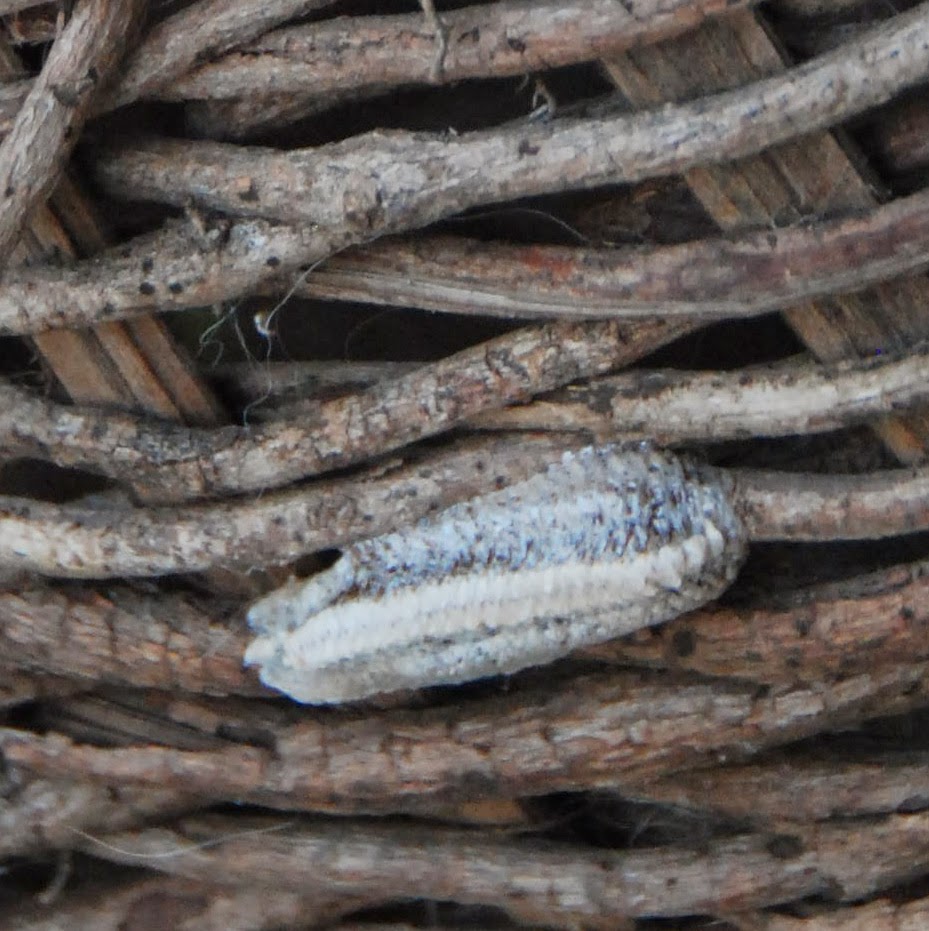 Recognize it up close?  A praying mantis's egg case.  I'm actually rather surprised that I haven't found more of them, as I had many, many praying mantises in my gardens this year.  I feel rather lucky that all of the mantises I've seen have been the native Carolina mantis, rather than the interloper, the Chinese mantis. 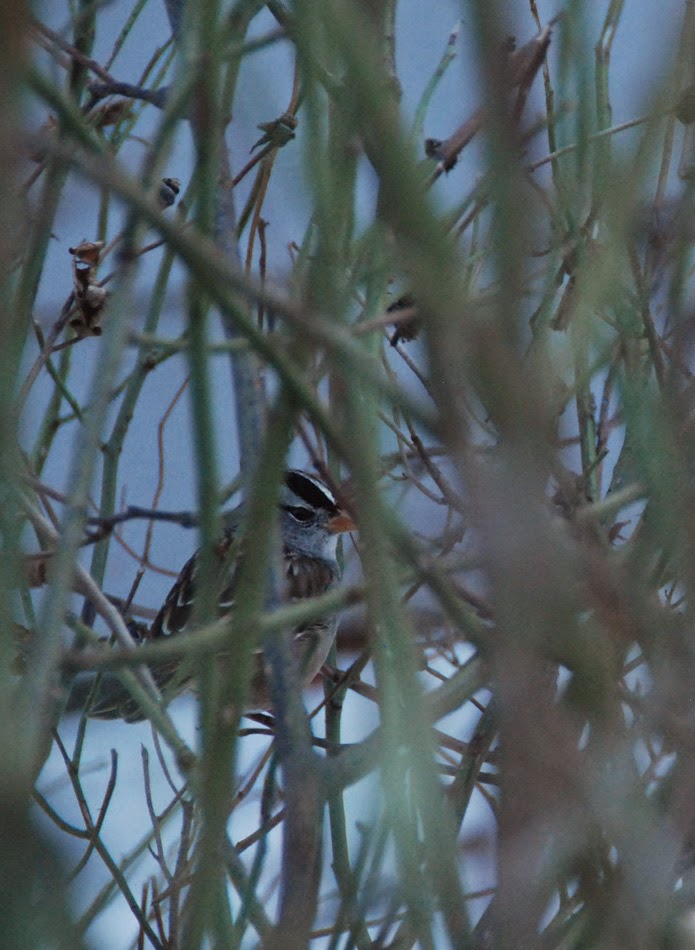 In the back yard, I managed to catch a photo of a white-crowned sparrow hiding on the far side of a rose bush.  I was quite close, but evidently this little beauty felt safely hidden, because it made no move to flush while I stood there. 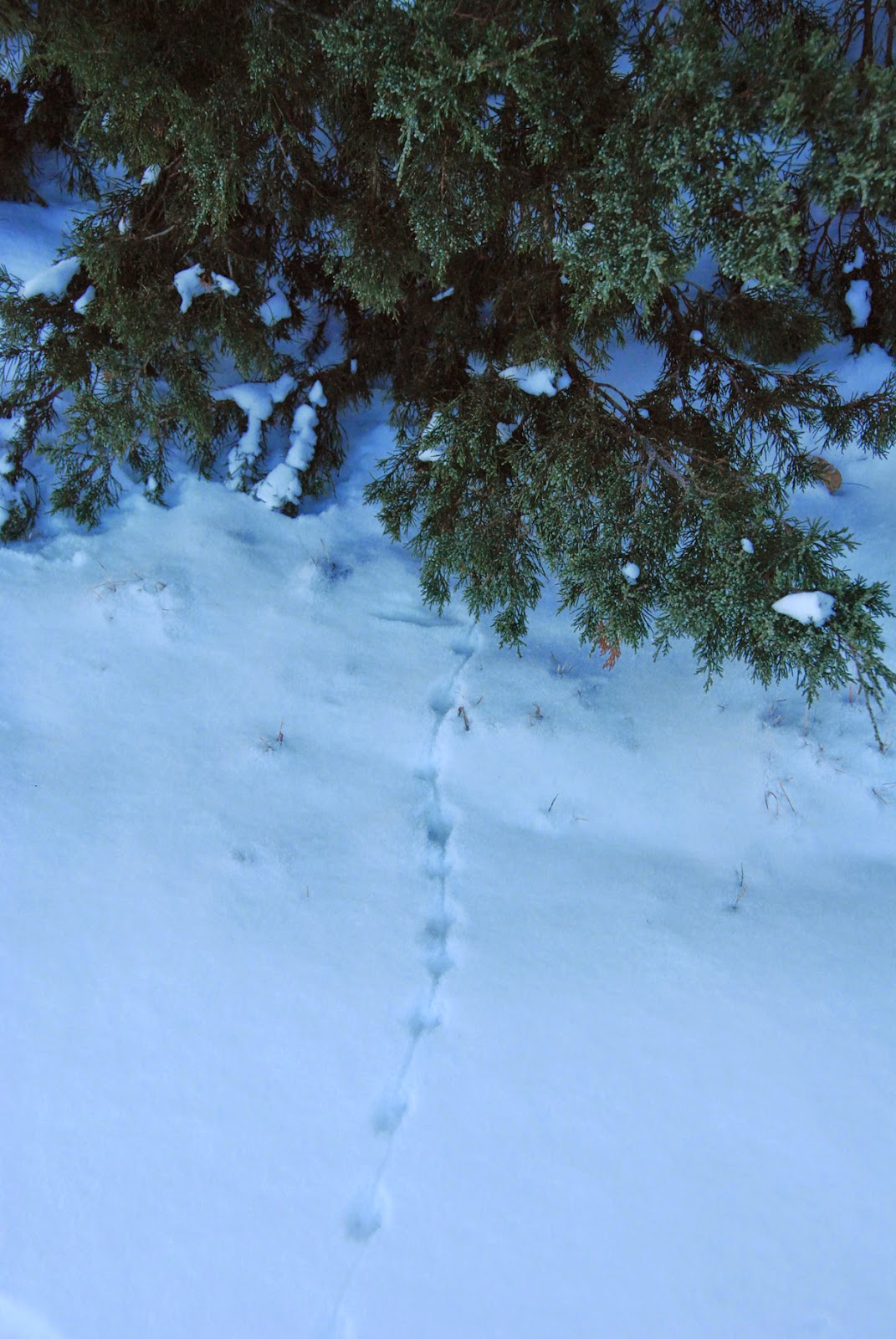 The most unusual sighting was the set of little tracks going across the driveway, between the redcedar hedge on the south side and the Rose of Sharon on the north side of the driveway.

With the obvious marks of the tail dragging, I'm quite sure it's a rodent of some sort.  Perhaps a hispid cotton rat.  I really don't know how to tell different rodent tracks apart, but I do know that I've got plenty of cotton rats around!

I didn't get out to take photos until 2 days after the snow fell, so I have no glorious shots of snow, quietly sifting out of the sky, or sitting heavily on the branches of the trees, but there was still enough snow around to document the start of winter.

Each year is so unique - I wonder what THIS winter will bring?  Is this early snow the sign of much more to come?  Or is this the only snow we'll get all season?  There's no way to know so, as always, we'll take the new season, day by day, week by week, month by month.  Suspense - natural style.
Posted by Gaia Gardener: at 8:19 PM

It is odd to see trees with leaves frozen in place. I hope it isn't bad for them. Our neighbor's cottonwood trees hardly dropped any leaves before the sudden freeze. I was out in the cold briefly one afternoon and they were falling quite loudly. I think they were leaf shaped popsicles hitting the ground. So glad I decided to do garden cleanup even though we hadn't had a killing frost yet. It was a wonderful autumn. You got more snow than us with the cold. Love the animal track photos.

Yes, each season is different, and unpredictable. I am not ready for winter! Like you, I didn't get any snow photos until the second day after the snow.

I love your last thought about nature, but can't remember it to quote it now.

I'm envious that you have the egg case of a Carolina mantid rather than a Chinese mantid. I think all I have seen are Chinese mantis egg cases.

The only things blooming here when the polar vortex hit was willowleaf aster, and even though the temps got down to the upper teens the asters are still blooming a little bit. Today is very warm and the bees are still visiting them in droves.

I've been experiencing the same thing with the white-throated sparrows here -- I've been surprised by how close they've been hanging around while I work in the garden. I think they see me as part of the landscape now. lol

I'm glad to hear you have plenty of the native mantids in your garden, but I'm also a little disappointed to find that what I see here are all most likely non-natives.... I didn't know that even this species was facing foreign competition. Thanks for the heads up!
The frozen asters are a surprise:)

That is a cute photo of the sparrow. They hide often in brush or thicket like that. The snow is all gone now in Buffalo. The warm spell dispensed with it quickly. Lucky there was no major flooding. Winter did come early, similar to last year. The tracks are cute no matter what left them.