The Fly and the Caterpillar: Not a Love Story

As I was doing a quick look-see in the vegetable garden yesterday, I heard a fly buzzing.  Why a buzzing fly caught my attention, I really can't tell you, but it did.  Perhaps it was because the noise was coming from the top of a tomato plant, which isn't normally fly country.  Anyway, I stopped to see what was going on.

At first I didn't see anything, then a movement attracted my attention.  Was that a smallish horn worm?

I kept looking, finally able to see the outline of the caterpillar against the underside of one of the tomato leaves tucked in a ways.  Suddenly I saw a quick, dark movement and the caterpillar thrashed wildly.  What was going on???

As I watched, it became obvious that a fly was attacking the hornworm.  Every time the fly circled around and came near, the hornworm would move.... Trying to defend itself?  Trying to attack the fly?  Trying to keep the fly from landing?  I couldn't really see what was going on, but I took a series of photos, hoping to capture something with my lens that my eyes couldn't see.

Here are the best shots from the encounter... 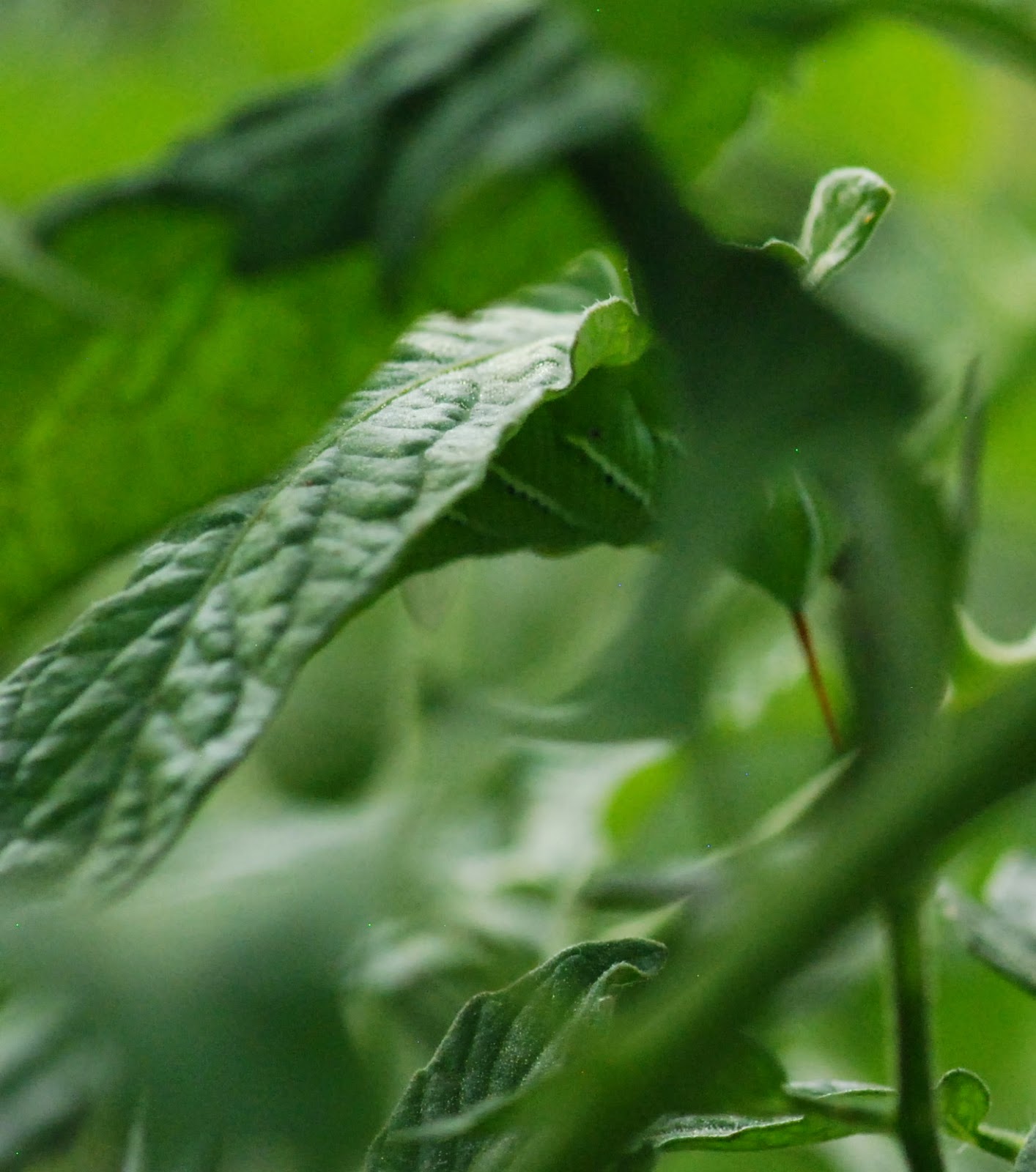 The hornworm when I first saw it. 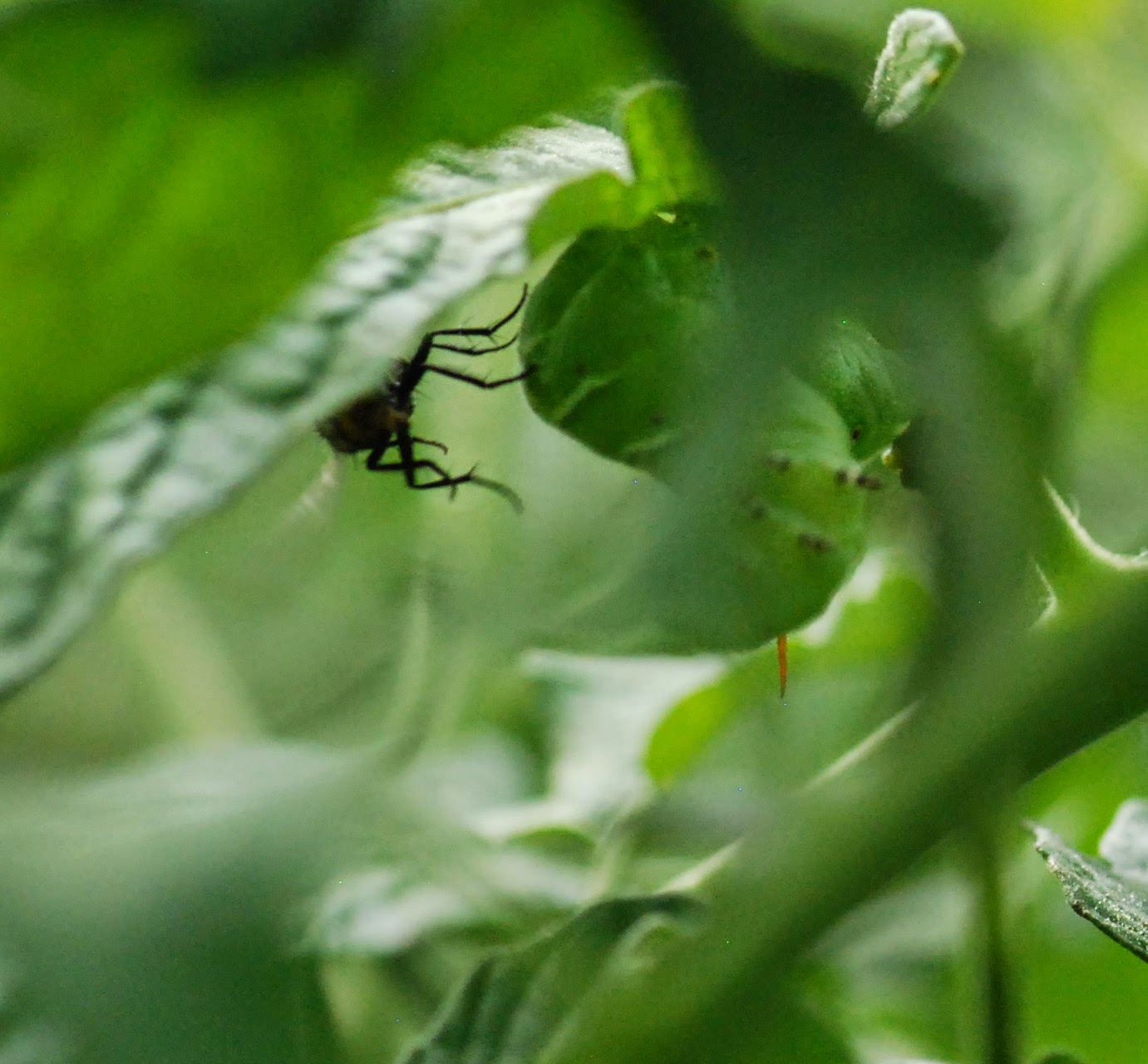 The first view of the fly. 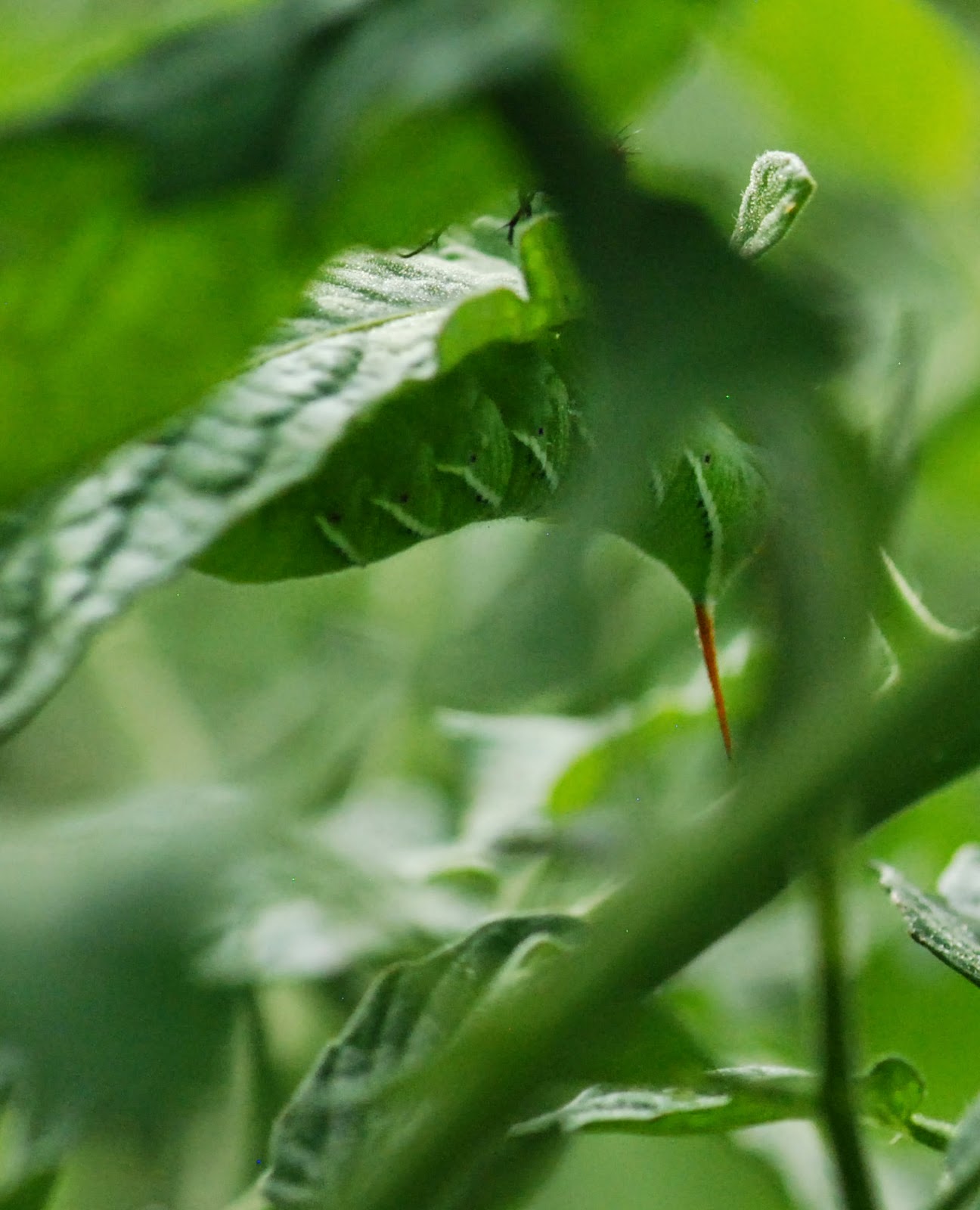 Another "fly by" by the fly.  (Look carefully - you can see the fly's legs above the caterpillar;  the body of the fly is mostly hidden by the tomato stem.) 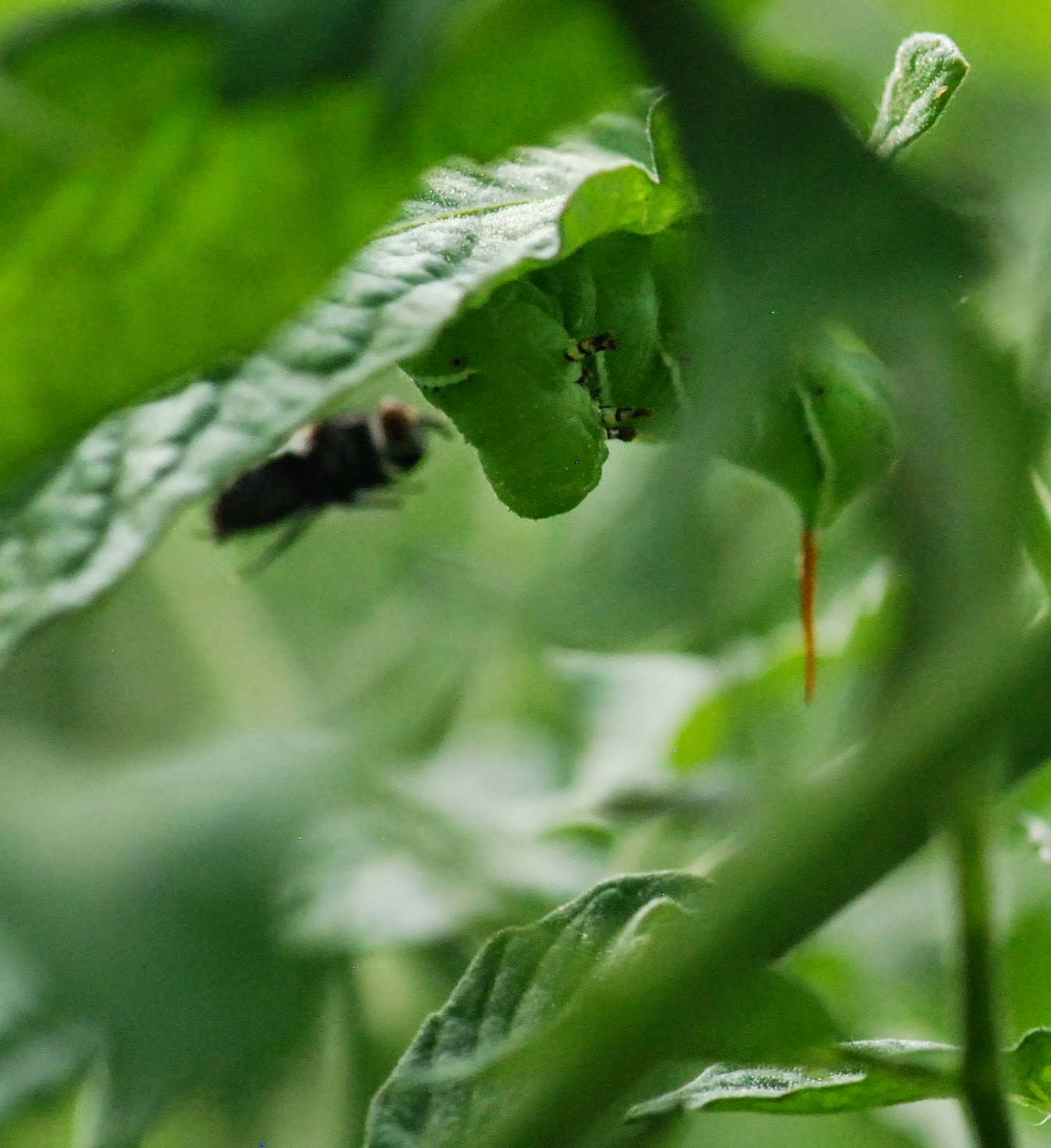 The fly comes back for another go-around. 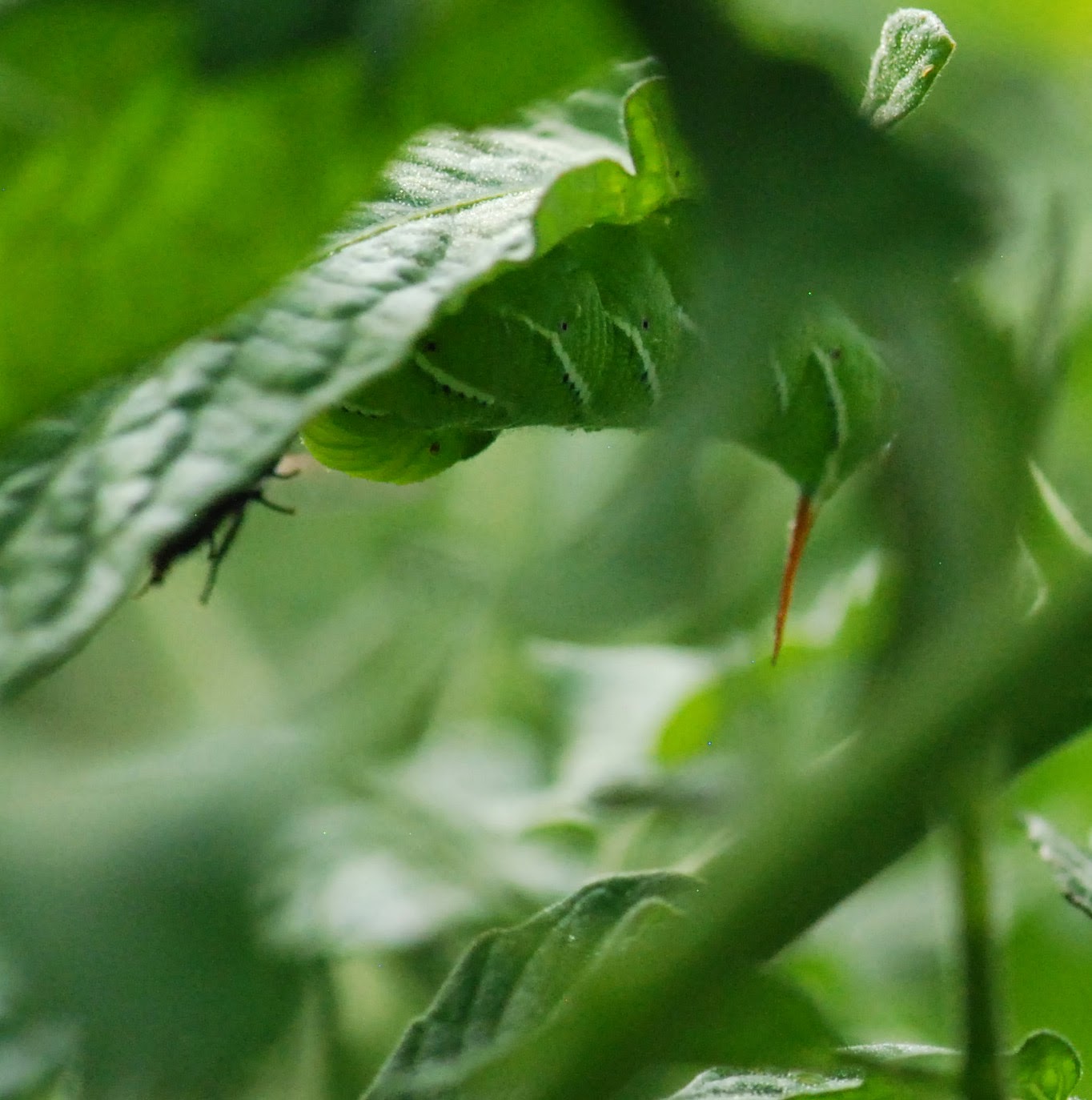 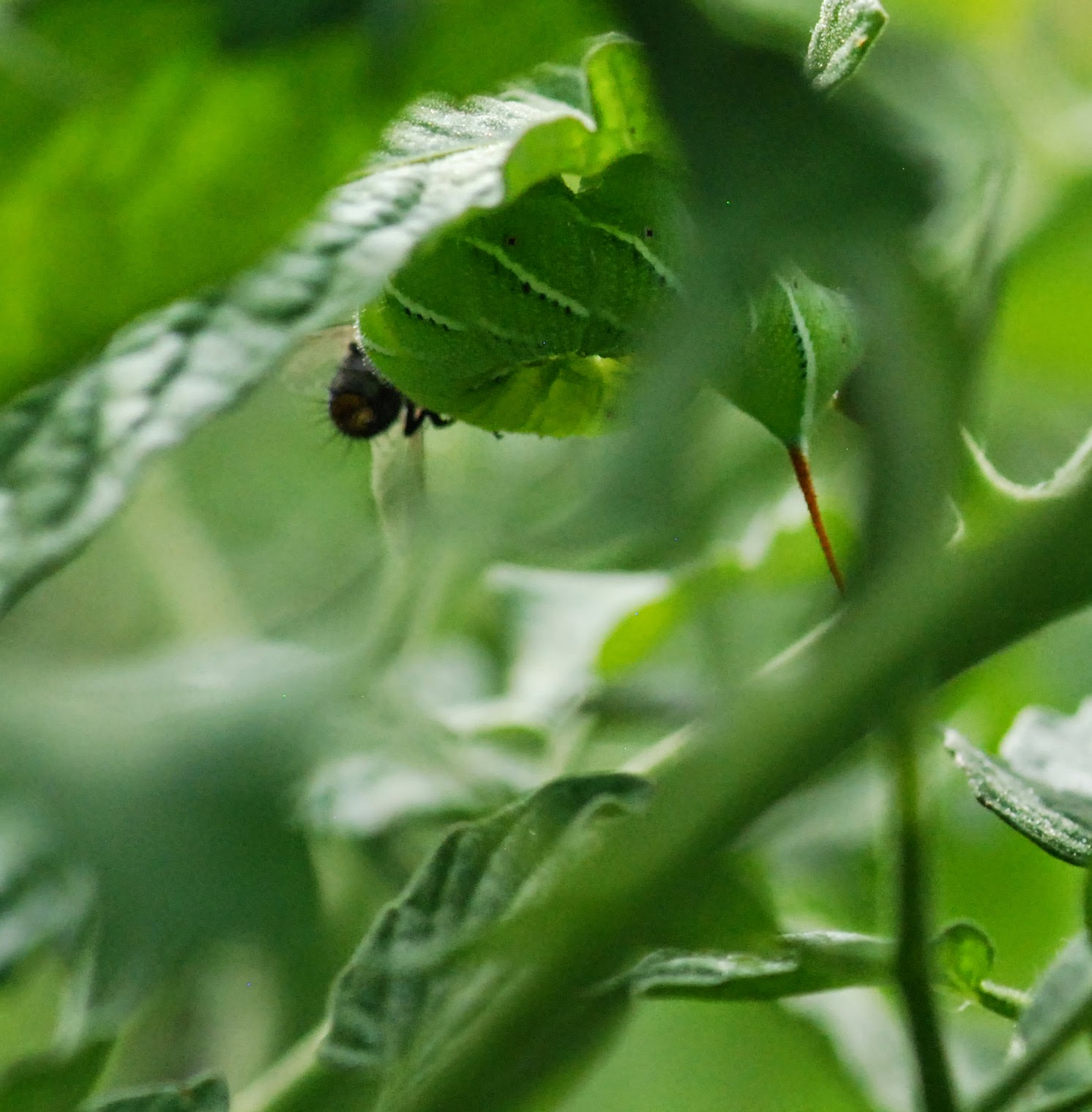 This one lasted a little longer and the fly seemed to land on the caterpillar's body, despite the hornworm's thrashing and attempts to defend itself. 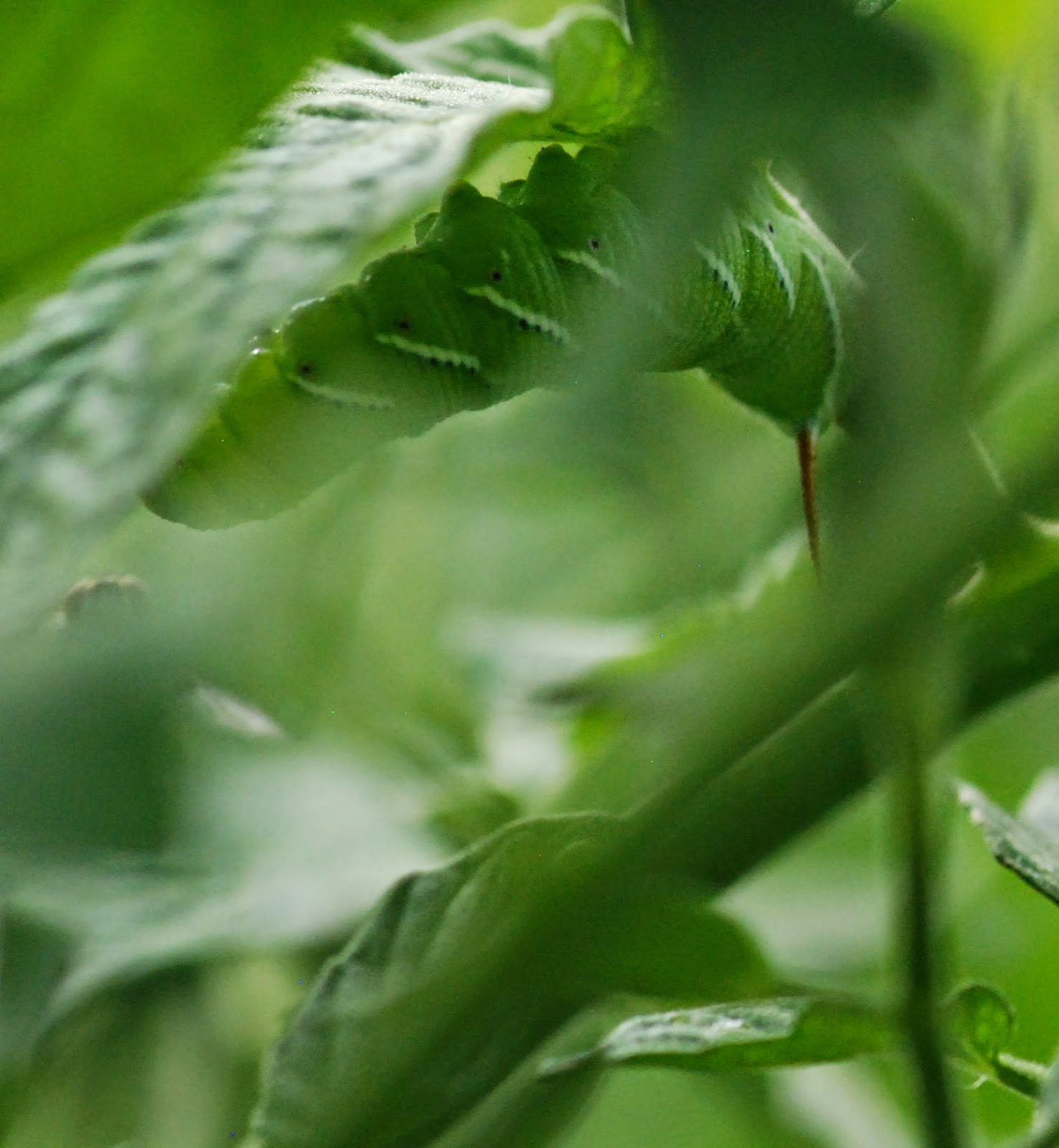 Fly attack #5.....  (You can just see the eyes of the fly coming into focus to the left of and slightly below the caterpillar.) 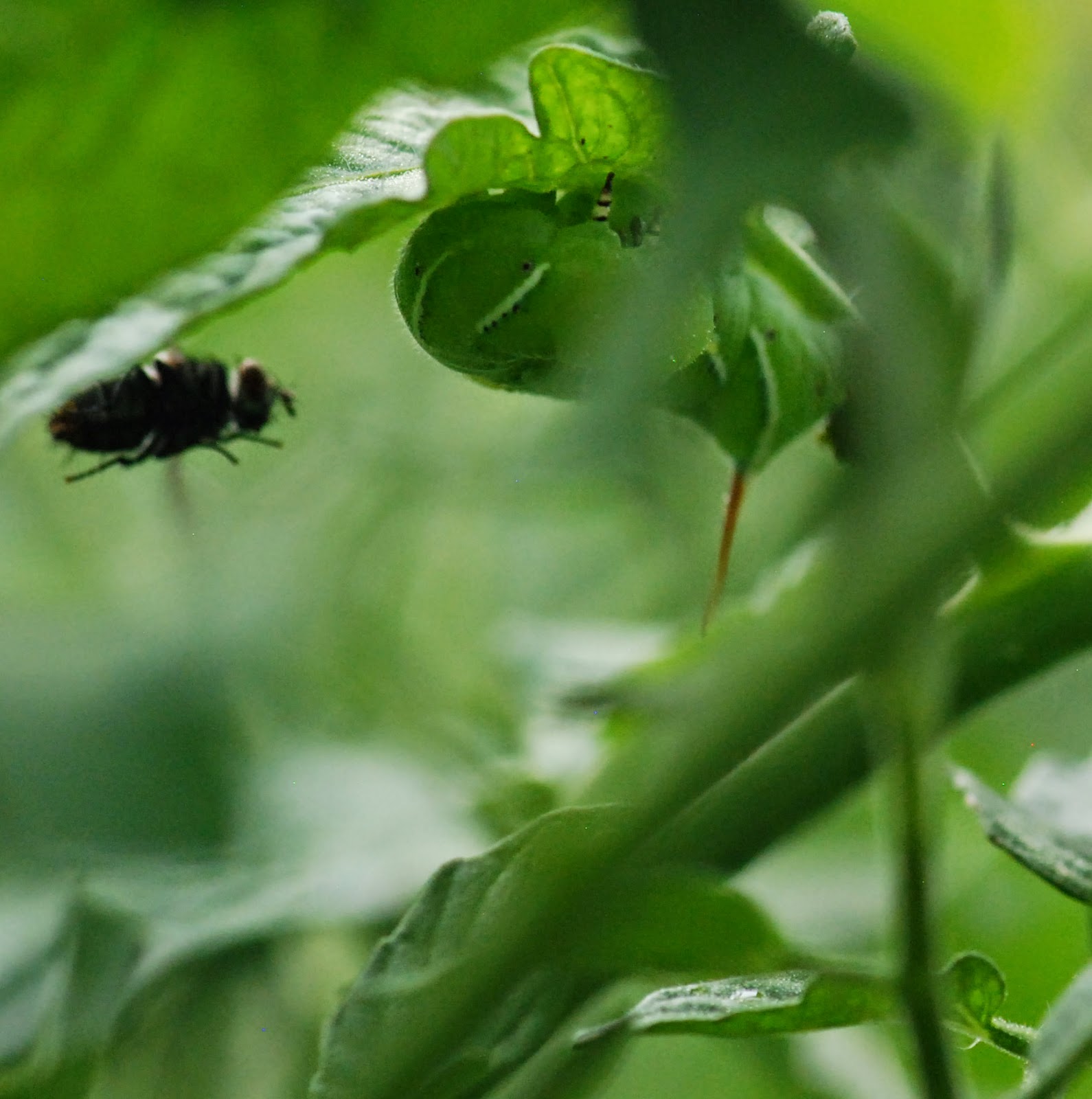 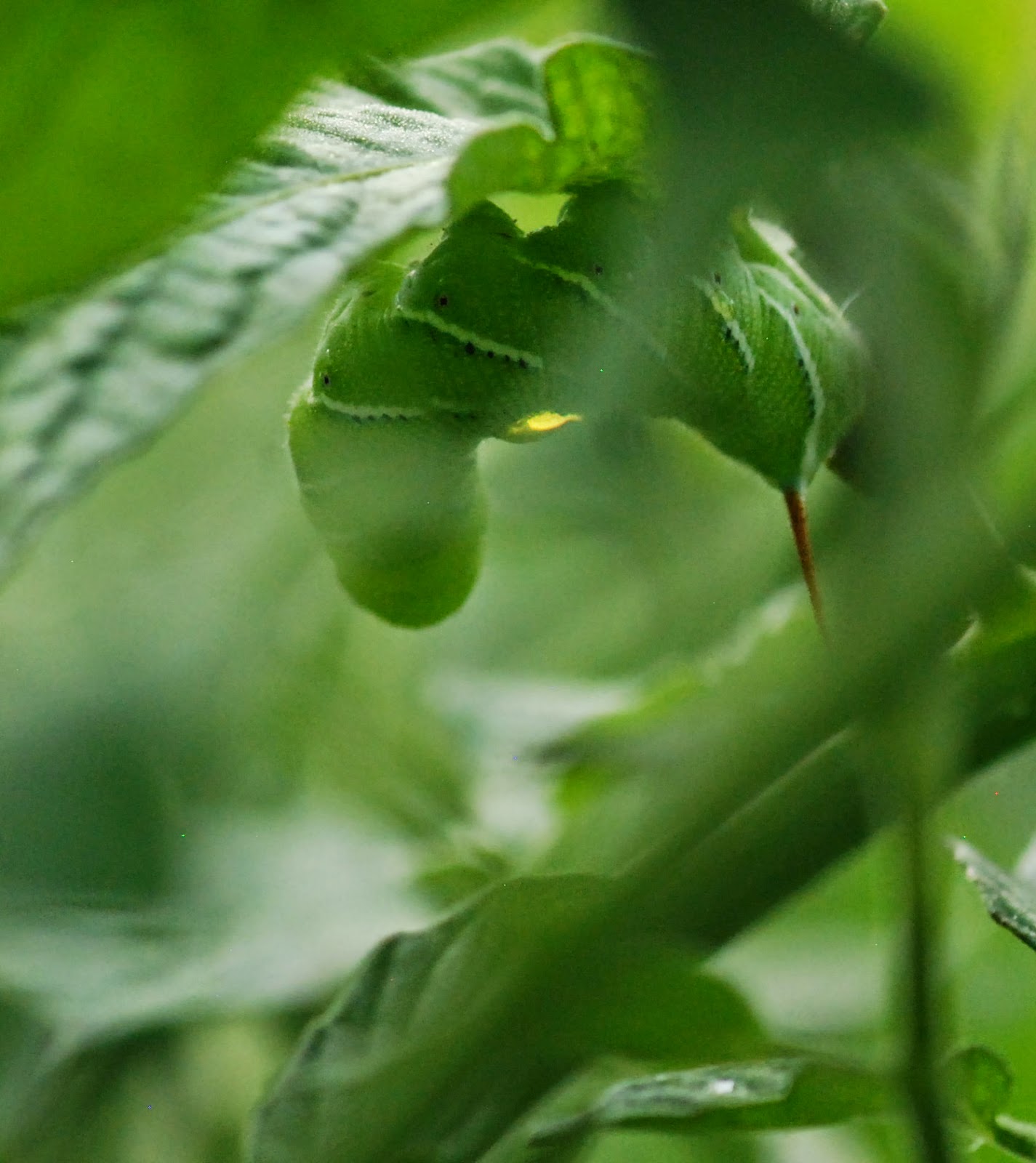 Now there's fluid on the back of the caterpillar;  the fly has definitely made contact. 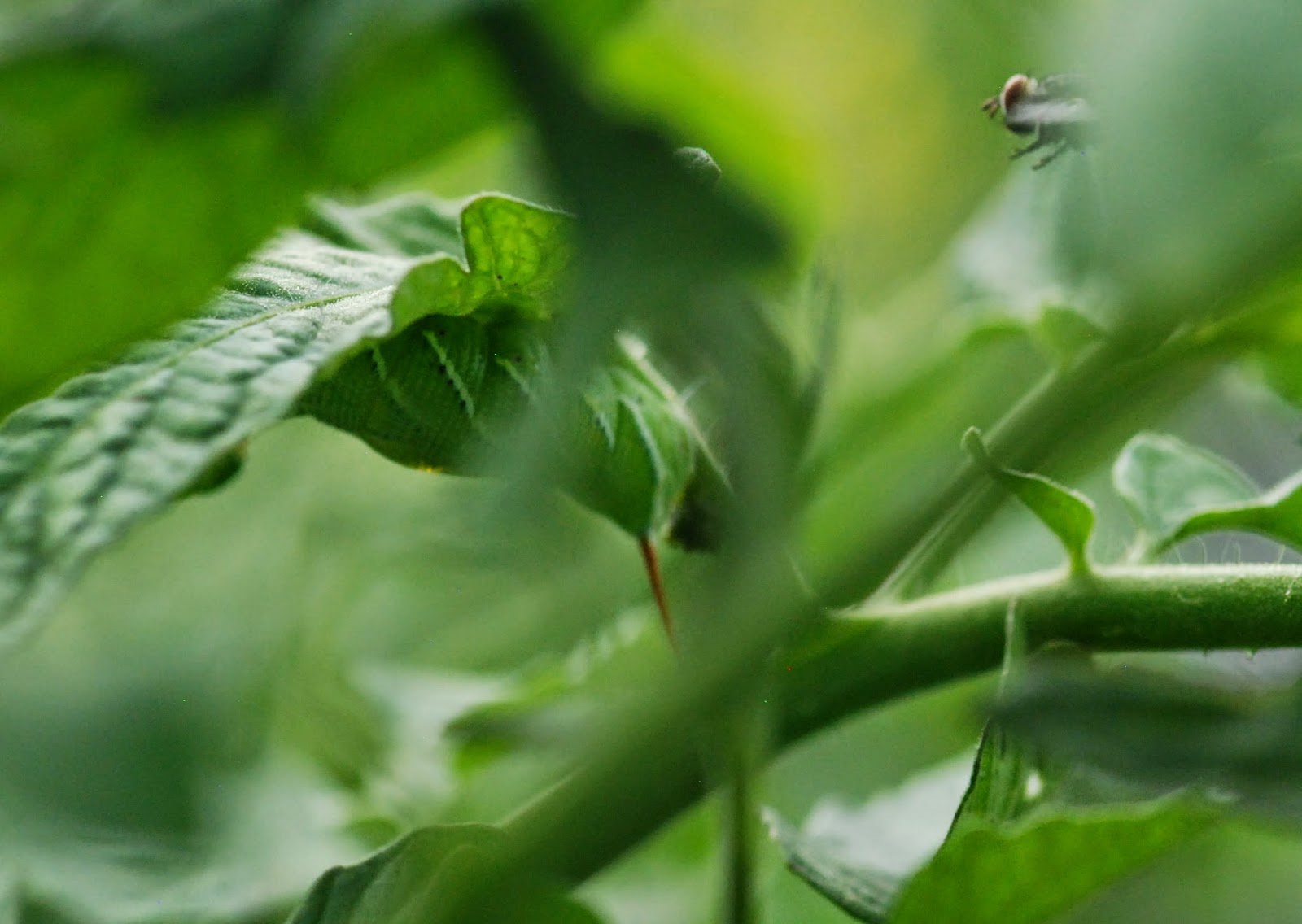 Still the fly comes back again.... 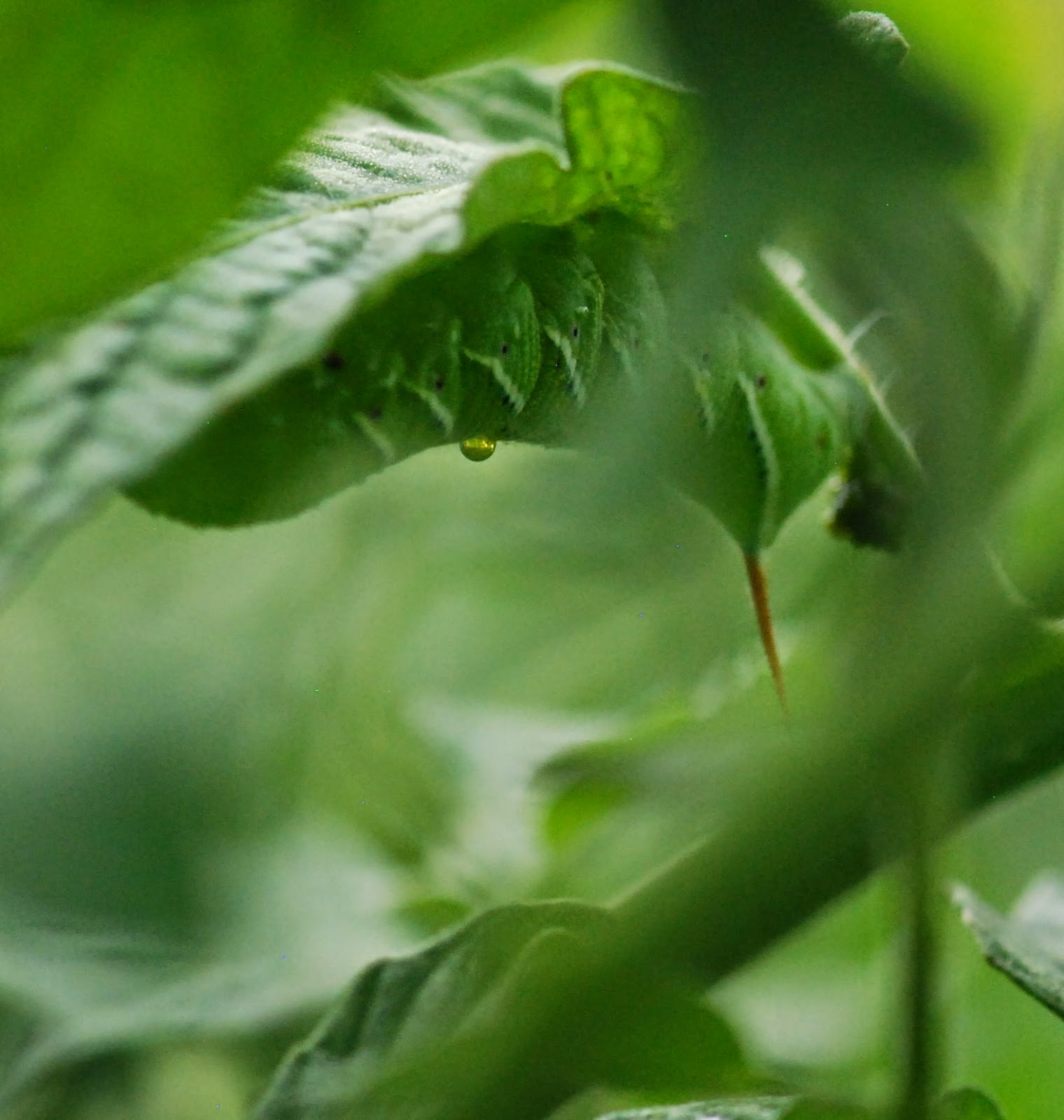 But this seems to be the end of the attack.  A drop of "blood" on the back of the caterpillar remains, but the buzzing fly is gone.

According to my camera's time stamp, all of these photos were taken within a 2 minute window.  I don't know how long the attack had been going on when I chanced upon it.  Still, overall, the action didn't last that long.

I am assuming that the fly was a female and that she laid at least one egg in the caterpillar.  Judging from the fly's hairy abdomen that I could see in the photos, this was probably a tachinid fly.  If that's the case, the hornworm will go back to eating as if nothing has happened, but when it goes to pupate, the fly larva that has grown inside it will take over and kill the developing moth.  The hornworm pupa will actually only produce one or more fly pupae, which will, in their turn, produce more tachinid flies to carry on the cycle.

I knew that tachinid flies were parasitoids of caterpillars, but this is the first time I've actually witnessed the interaction between the caterpillar and the fly.  I see many, many tachinid flies in the garden, especially in the fall when they are feeding at my asters, so I knew this sort of event had to be occurring.  Adult tachinid flies are pollen and nectar feeders...and good pollinators.  Hornworms, while I think they are cool and interesting, are pests on tomato plants.  This is natural predator control at its most basic.

Life is not particularly gentle, but it tends to balance itself when allowed to do so.  Sometimes the variety of feeding strategies truly boggles my mind.   What predatory insects have you seen in YOUR garden lately?
Posted by Gaia Gardener: at 8:22 PM

That is quite the event to witness. I probably wouldn't have realized what was going on.
We have tons of hawk moths, but I have only seen one hornworm all summer and it was on my moon flower plant. Ever since I put a birdbath next to my vegetable beds, the horn worms haven't bothered the tomatoes much. I'm guessing maybe the birds eat them some????

Yes, GonSS, I'm guessing that the birds may well be eating the caterpillars...or maybe even the adult moths!

Which hawk moths do you see? I rarely see the tomato or tobacco hornworm moth, but I do see the white-lined sphinx moth quite frequently. Sometimes, if I'm lucky, I see the bumble bee mimics (Snowberry Clearwings) too.

Wow, what a really unique experience! Only could have been better if there was a video camera in your hand.

I'm not sure which hawk moths but there are at least three different sizes flying around here. They are loving my hummingbird feeder. I guess if I don't have any hummers yet at least something is enjoying the sugar water. The worms I've seen are a little orange in color. Not causing me much trouble so I'm leaving them be. I remember as a kid I had the job of picking them off the tomatoes to get rid of them.

You know, Prof, I actually did have a video camera in my hand...but I never use that capability on my camera and didn't even think of it. Oh, well. Opportunity missed.

GonSS, so the hornworms you see are on your tomatoes? That almost assuredly means either tomato hornworm or, actually, more likely, tobacco hornworm. You can google them and see which is which. I usually see tobacco hornworms around here.

Cool that you're having 3 different sizes of hawk moths! Do they look the same otherwise, or are there 3 different color patterns, too?

The hornworms seem to mostly be on my moon flower plant. I need to try and get some photos. The hawk moths don't hold still well. Ha!

How cool to witness that. Yes, nature's ways are not always gentle. There are quite a few insects in our planting areas. I need to pay more attention to which are predators. I know some of the wasps are. There haven't bee as many around the last few weeks.

Wow what a great capture and observation. I have not observed many predatory insects although they are here...

GonSS, Surprisingly, I've been able to photograph quite a few of the hawk moths - they don't seem to be very scared of humans, at least not when they are feeding. Give it a try - you might be pleasantly surprised!

Sue, I'm having a blast learning about the various insects in the garden - and I'm absolutely amazed at how many are predators! Thanks for stopping by.

Donna, Thanks for stopping by! As I told Sue, I'm having a great time learning about all the insects I'm seeing. The number and variety of predators is truly astounding.

Are you on Facebook? I thought of you when I posted the photo I posted of what someone let me know is an assassin bug eating a crab spider. I see at least a couple crab spiders a season. They also eat other insects.

Sue, I sent you an email with my Facebook info, based on the email address you have listed on your Blogger profile.

You take such great photos - I'd love to see the crab spider photo you captured.

I've never witnessed the act as you have. But I have witnessed the consequences with a Cecropia larva. I did not photograph the results, but when I found the cat it had the telltale whie fly eggs attached to its outer body which then entered. The tachnid larva were inside eating away and so did the cecropia...munching on our peony leaves until its back end was dissolving into a brown goop. It was amazing to see this caterpillar taking in nourishment to feed its demons.
Here is a shot of the cecropia larva in happier times.
http://stephengingoldphoto.photoshelter.com/gallery-image/Butterflies-Moths-and-Caterpillars/G00008v8T7iLAu2A/I0000il3s7e_mPaA
I was very disappointed to not get to see the adult eventually

Ah, I wish you had photographed the result of the tachinid larvae eating away inside the caterpillar, Steve. It wouldn't have been pretty, but it would have been very instructive. It must have been fascinating to see.

That said, your photo of the Cecropia caterpillar is stunning.

I too saw a fly attacking a horn worm, and the horn worm attacking back. i never realized that this acrobatic maneuver from the horn worm was possible. i had moved several of the horn worms (tobacco) from my garden tomato plants so that they could finish up and go to pupate. i love the hawk moth. this morning they (i guess) had made their way back to the garden plant, and i had looked and looked for them to no avail. then i saw the same kind of fly buzzing around a tomato branch, and there sure enough was the horn worm. well, i pulled him off and stamped him to death, i hated to do it but i would like a tomato crop and possible a few later.
i hope to have other plants for them next year. i thought their enemy was a wasp, i did bot know about the fly.