When I posted my cicada photo on Bug Guide, for help with identification, I was also given links to pages that have recordings of cicada songs.  For example, there is the page called "Cicadas of the United States and Canada East of the 100th Meridian".  (Note:  I can't get links to work properly in this part of the post, for some unknown reason, but you can type the title into a Google search and the site will show up at the top of the list.)

Like birds, each different species of cicada has a different song to help it locate a mate of the proper species.  Apparently it is sometimes easier to identify a cicada from its song than from its appearance...for humans, if not for cicadas.

It's amazing!  When I go outside now, I feel like I'm experiencing an entirely new layer of awareness.  Suddenly, my mind tunes into the specific rhythm and tone of the cicada songs I'm hearing, on top of the familiar bird songs, the visual beauty of the leaves and flowers, and the feel of the wind on my skin.  I'm astounded at how much richer my outdoor experience has suddenly become!

Here are some of the various cicadas that I have identified in our yard.  If you go to the above page with its cicada songs, you can hear the different song for each of these species.  (Sorry, I tried to link each song below the photo, but a couple links worked and the rest didn't.  It seemed less confusing to just send you directly to the page itself, which is very easy to navigate, than to have some functional links and some dysfunctional ones.)

Shown above, the bush cicada, Tibicen dorsatus, that I talked about in my last post, has a long, loud monotonous drone. On the other hand, another cicada that I see fairly frequently, the superb prairie cicada, Tibicen superbus, has a song that is generally quieter, interspersed with louder rattles that almost give a wave-like feeling to the sound. I find that the song of this cicada is one of those iconic sounds that transports me outside to a hot summer day, no matter what time of year it is!

I don't have a photo of the next species, but when I went out early yesterday morning to take the trash out to the curb, the scissor grinder, Tibicen pruinosus, was calling from the honey locust hedge.  Here is what it sounded like (and probably looked like, if I had been able to see it!)  Note:  this is not my recording. 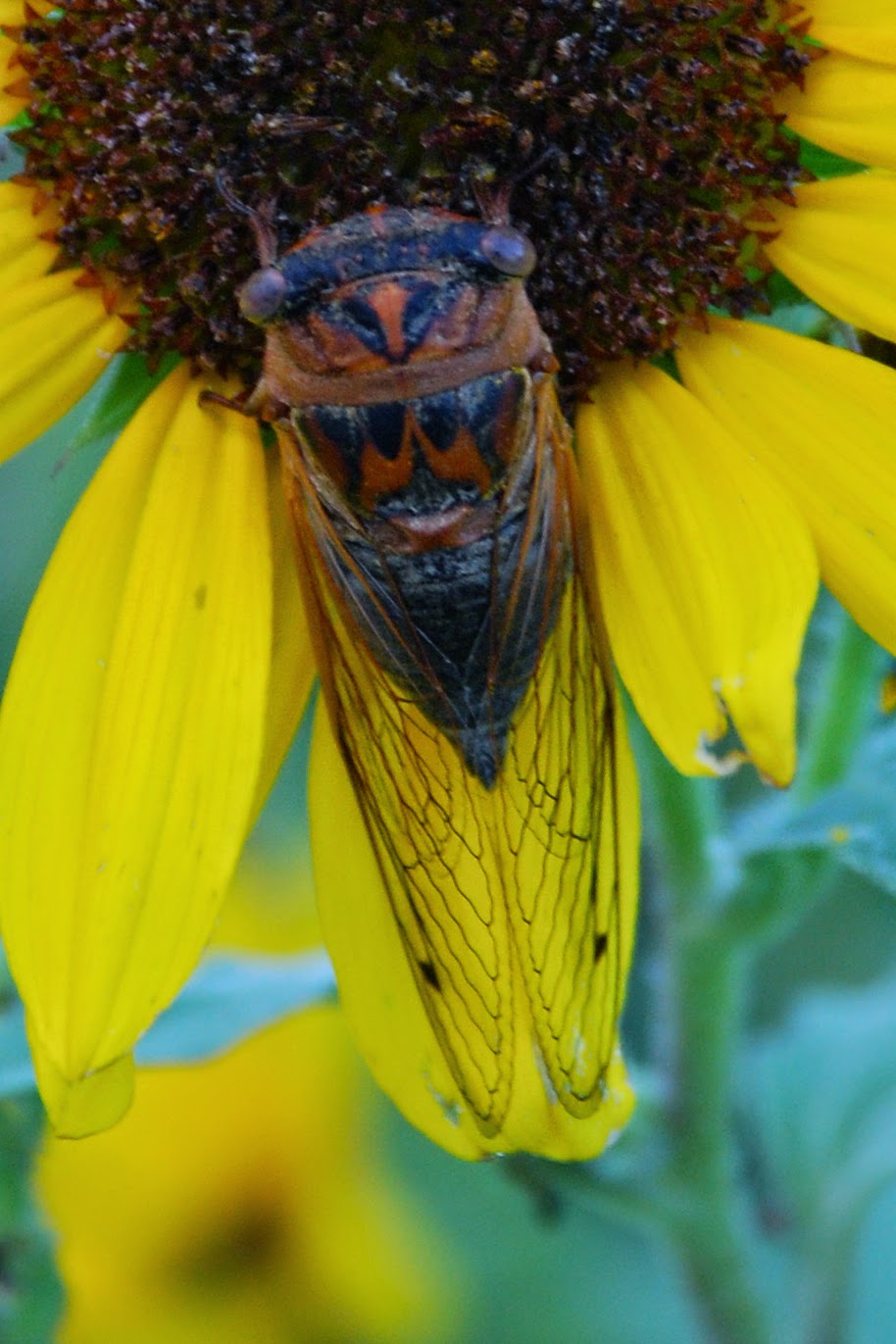 The fifth species that I've identified, so far, is the Whitened Dog-Day Cicada, Tibicen dealbatus. To me, it's song sounds like 2 insects combined into one body:  a droning cicada and a cricket, fighting it out inside the cicada's abdomen.

As a side note, in cicadas, only the males sing.  Unlike grasshoppers or crickets, male cicadas do not stridulate, or rub various parts of their body together to produce their song.  Instead, male cicadas have paired membranous structures in their abdomens called tymbals, which vibrate rapidly, the sound resonating within the body of the cicada.  Some cicadas sing so loudly that their song could cause damage to the human ear if the insect were singing right beside it.

It's going to be an interesting challenge now to see how many different cicadas I can learn to identify from their calls!  It'll be fun to match up photos with calls as well, helping me to determine just exactly which different species I'm sharing our land with.  The more I learn, the more I realize I don't know.
Posted by Gaia Gardener: at 5:08 PM

Hi Cynthia.
I followed the link from Welcome to Pairodox Farm after reading David's comment about your Cicadas. Glad I did because the read was just as enjoyable as the excellent images.
I look forward to future posts.
Steve

Steve, thank you so much for the kind words! I jumped over to your site - and I love your insect images. They are wonderful!

Thanks, Cynthia.
I noticed that we both posted Double-banded Scoliids.

For some reason I did not get notification of your reply or subsequent postings. Not sure why, but I'll try to subscribe again.

Steve, I'm not sure how to post on your site. Do you have to join one of the groups? That's what it looks like to me...

I have no idea how best to subscribe to my blog. On Blogger, I can just add blogs to my blogroll and it does it automatically....

It worked on my second try, Cynthia. I am not sure what happened on the first try, but I am sure it had something to do with going through Google.
As far as leaving comments on my posts, you just need to fill in your name, email address so replies will go to you and a link to your blog so others may follow to see what you post.
Unfortunately, I think you may have to do that each time as a non-WordPress blogger. If that is too much of a hassle don't worry about commenting.
Interestingly, now that it works, I also got notification of my comment that I left for you.

So glad it's working now, Steve. (Is Steve okay? I know some people prefer to use their full name.)

I'm going to head over and see what magic I can work on your site!

As I've explained, I was exploring Google+ rather than your blog. I'm reoriented now, Steve!

Wow--I love cicadas! So many people find them annoying. We used to live in Missouri, but moved to South Dakota, then Minnesota, so we rarely have seen or heard them since then. I found your site when looking for 'stick ums' when I was writing a blog post about cockleburs! Your pictures are amazing, by the way!
Denise

Thanks, Denise! I'm surprised you're not hearing or seeing cicadas up your way. I didn't realize they were more of a southern insect....