There's a myth that Kansas is black and white and gray all over.  I don't know where that could have started....

Dorothy aside, it's fall around here and on my way back from town this morning, I decided to stop and capture a few shots of some of the fall color I'm seeing around the area....

The smooth sumac (Rhus glabra) seems late to turn this fall, but it's sure putting on a show! 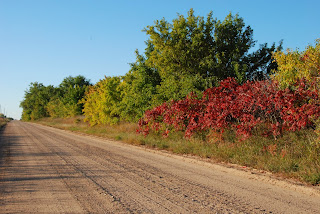 Each patch seems to have a slightly different hue to it.  Soil differences?  Exposure?  Simple genetic variability?  I don't have an answer.

One of the problems with collecting fall leaves in Kansas is that you have to be careful NOT to pick up poison ivy leaves.  For example, this clump of poison ivy (Toxicodendron radicans) is coloring beautifully.  They're tempting, but look - don't touch!

Poison ivy is another plant that bears different colors in different settings, so you have to be particularly careful to watch for their distinctive leaf shape.  Sometimes the clumps of poison ivy sport white berries - this is a dead giveaway to their identity, especially combined with "leaves of 3".

Smooth sumac is not poisonous, although its fall leaves are colored in similar shades of red and orange.  Not only do the leaves of smooth sumac have many more leaflets than those of poison ivy, the sumac berries are born in upright clusters and are dark red and fuzzy.

So far I've been showing poison ivy in its shrub form, but in Kansas there are 3 forms of this tricky plant:  shrub, understory "forb", and vine.  Like the shrubs, right now the poison ivy vines are also in full fall color.  Here is an old osage orange tree (Maclura pomifera) growing in a hedge along the road, with poison ivy growing up its trunk and smooth sumac at its base....

Not bad color for a black and white state, is it?!

This grove of large cottonwood trees near the river is sporting several vines that are trumpeting fall right now.

Looking more closely, I noticed that the yellowish green leaves below the Virginia creeper actually belonged to another vine, raccoon grape (Ampelopsis cordata).

A little less dense, poison ivy was nearby and showing off colors of orange and yellow and peach.

Cottonwoods (Populus deltoides) are just starting to turn their brilliant fall yellow.  Occasionally I was able to get a photo that included a cottonwood beginning its fall transformation.  Here is a cottonwood, with a nice clump of smooth sumac at its base and, if you look closely, a bit of poison ivy adding a touch of orange and yellow to the tapestry of leaves. 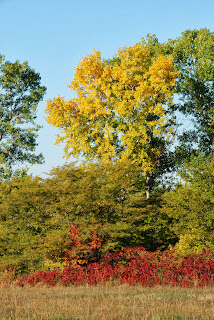 How many of these fall beauties do I actually want to add to my yard?  Well, I'd love to have smooth sumac!  I collected some berries and scattered them this morning.  I've also transplanted a couple plants that I've dug up from willing donors, but I'm not sure if they've survived.  Since sumac is a colonial plant, individual stems don't have many roots when dug out, and I planted them away from the house where, for better and for worse, I don't see them regularly to keep tabs on them.  I wouldn't plant smooth sumac in a small yard, but it's a gorgeous addition to acreage.


As far as cottonwoods, I have a couple large ones down in the draw.  I'd love to have more up in the "yard" area, but they have to be native Eastern Cottonwoods.  The horticultural "seedless" varieties are some weird mix of Populus genetics that don't do well around here, succumbing to cottonwood beetles just as they get up to true tree size.

Poison ivy?  I'd love NOT to have that species, but it's pretty hard to live anywhere in Kansas and not have poison ivy cropping up!  The more land you have, the more poison ivy you'll have.  At least we've decreased the amount of it we harbor - there are no more 30' patches!

We have raccoon grape, too.  It's a very aggressive vine, so I don't encourage it, but we do have it, and the birds love its tangles and berries.

Finally there's Virginia creeper.  I love Virginia creeper and I've had a few small plants show up in the flower beds.  I've left one or two, training them as groundcover.  If I had a privacy fence, I'd bury it in Virginia creeper.  However, I don't have any fences except the chain link one around the lagoon and, since I don't want it growing on either the house or garage, I'm taking each newly found baby plant on a case by case basis as to whether it stays or goes.   Each of us lives dangerously in their own style, I guess!

Here's to fall - colorful, even in Kansas!

The virginia creeper is in full scarlet around here. And I've often contemplated making a tower of poison ivy vine in my garden for the fall color (I'm not allergic to it).

Gaia, I have a volunteer Cottonwood that turned out to be a male. It may be better adapted to Kansas and you're welcome to a cutting if you know how to root it :)

Prof, thank you for your cottonwood cutting offer! I'll have to do some research and figure out what I'm supposed to do to take a cottonwood cutting, as well as when the best time of year is. (I think the process is something incredibly difficult, like taking a cutting and sticking it in soil...but I'll get back with you!)

I've often thought that poison ivy would make a great security fence around a home, if it were labeled of course! It can be really pretty, so it would enhance property values, and it has great berries for the birds. A win-win-win! Personally, I suspect that landscape architects may be missing an awesome new design concept.

As far as your tower goes, I trust that you know your allergic response can change with increased exposure?! A poison ivy tower might not be that good an idea if you end up converting. It would be pretty, though....

Virginia Creeper is so pretty but I don't have space for it. Love the native sumacs this time of year.
Thanks for sharing the color in your part of KS.

GoSS, I wonder how Virginia creeper would do in your forest? Or maybe on the fence in your side yard.... (I love Virginia creeper - it's always worth trying to squeeze it in, in my opinion!)

Wonderful fall colors, it was special to get to see a little of the beauty of Kansas.

Janet, The Queen of Seaford said...

Auntie Em Auntie Em! haaha, love the reds, poison ivy and all! I think you should find a Sourwood to plant, what a glorious red fall color!