A Golden Bed for Pollinators

Waxy goldenweed.  Spanish gold (I love that name!).  Saw leaf daisy.  Whatever common name you use, the plant is Grindelia papposa, it's a native plant to the central and southern grasslands and to parts of the southwest, and it's considered a weed in this neck of the woods.....er, prairie.

That's because it's an annual - or, sometimes, a biennial - and it colonizes open soil, functioning in the ecosystem to keep that soil from washing or blowing away.  With lots of open soil on many farms, both in cultivated fields and in overstocked pastures, Spanish gold shows up frequently in the agricultural landscape.  Since people, for the most part, don't seem to care if soil washes or blows away and since cattle don't like to graze it, farmers tend not to like this plant.  Hence its status as a weed.

But what a great plant it is for around here.  It's incredibly drought tolerant:  in this year of almost no rain amid several months of temperatures ranging from the 90's regularly into the 100's, this plant has stayed green, grown tall, and now is blooming brightly, totally unfazed by harsh conditions.  I frequently pass a fallow agricultural field that has become a vision of sunshine yellow set off by deep green because of the blooms of this plant. 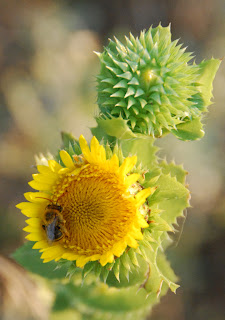 What I like the best about Spanish gold, though, is the role I've seen it play for solitary bees, those native pollinators that are so important in our landscapes.  When I go out in the evening, nestled in almost every newly opening bloom is a solitary bee, bedded down for the night.  The petals of these unfolding blooms, which stick straight up for several days, must form a perfect little chamber where the bee can nestle, undisturbed by wind, for the night.  Given their necessary habitat of open soil, often there are solitary bee nests in the ground right nearby.

The photo below shows a solitary bee, settling for the night, along with the mummy of a little bee fly stuck on the petals.   I have no idea what caused the bee fly's mummification - a parasite would be an ironic mechanism, since bee fly larvae are, themselves, parasitic, often on the larvae of solitary bees.


Here is another photo of an opening Spanish gold bloom, with both a solitary bee and a bee fly in it.  Compare the antennae of the two, as well as how the wings are held.  Flies have 1 pair of wings which are often held at any angle to the body at rest, while bees have 2 pairs of wings that are usually folded over the abdomen at rest.  The antennae of flies tend to be very short, while bee antennae tend to be longer and often bent, fairly near the head.


This is yet another of those native plants that could definitely have a place in a garden setting.  Its foliage is clean and has an interesting texture, being waxy, grayish green and having the leaf edges lined with little hairlike, soft bristles.  The flowers are bright and pretty, and are attractive from before blooming through at least the end of the open blossom.  Spanish gold requires no care and is well adapted to xeric conditions.  Certainly worth consideration to see how it could be integrated!


So I'll leave you with a bright, sunshiny face to think about, the next time you pass by that plot of "weeds" - remember:  it's only a weed if you think it is! 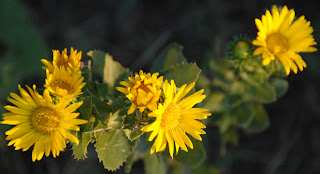 Thanks for this post. This is a new plant for me.

Ah. .I have been seeing lots of that plant from the road, thinking that I needed to get close to it to see what it was. They are definitely a nice bright spot!! Thanks for the information!

What an interesting post! I'm not familiar with this plant, though I may very well have seen in open fields and not known what it was. Its flowers look like the perfect resting spot for these little bees.

I vaguely remember a similar plant from my younger days. It was thought of as a weed back then, but could be a candidate for my prairie garden today. Thanks for sharing.

Thank you for your kind words regarding Penny.

Spanish Gold is a lovely name, for a lovely plant!

Pretty as a daisy or sunflower! I am spotting lots of yellow bloomers along the roadside. Am glad the bees have a safe place to land...