Yesterday morning the boys and I "suited up" and went for a stroll around the Back 5.  It was our first time out in over a week and I noticed several flowers blooming that must have just recently opened, as well as a myriad of insect pollinators visiting just about every flower they could find.

It was the blooms and insects that caught my eye, so I have few photos of large expanses.  In a future post, I think I'm going to go into more detail on a couple specific flower species, highlighting the variety of pollinators I saw visiting them, but I thought a relatively quick overview might be enjoyable.  (I have enough photos from yesterday to fuel a week's worth of posts!  Not, of course, that I'll get them all written, because by the end of a week, I'll have found something else I'm more interested in sharing.)

I had barely gotten out of the courtyard before I noticed something new:  the black-eyed Susan (Rudbeckia hirta) has started blooming.  Almost every bloom I saw had at least one insect visiting it - so this is one species I'm going to try to talk about in more depth later. 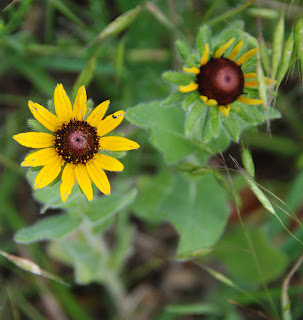 About 10 steps later, I stopped to take a photo of this prairie petunia bloom.  I love this little plant.  Its scientific name, Ruellia humilis, makes me think "Humble Ruellia," and it seems to have a vibe that reminds me of violets, although the two species are not related at all.  Doing a quick Google search, I was amused by all the common names:  wild petunia, hairy wild petunia, fringeleaf wild petunia, plains petunia, zigzag ruellia, low ruellia, hairy ruellia, and various combinations of all of the above.  Thank goodness for scientific names!


This is not actually a petunia, but the bloom must have reminded the early settlers of petunias when they named it.  I've noticed more and more of this plant coming in as I've let the grassy areas grow up.  It's a great little perennial and blooms off and on all summer long.  Several of the internet sites said it does well in gardens (and will handle part shade), so I'm going to try collecting some seed this summer and see if I can get it started in the courtyard.  The dry shade there is such a challenge.

Oh, one last comment on prairie petunia - it is incredibly hard to photograph well for me.  The color is a beautiful soft purple that usually seems to bleach out in a picture.  I'm particularly excited about this photo, as it's one of the closest to the true color of the bloom that I've been able to get.


Back to the walkabout, as I crossed the draw, I noticed something white lying on top of the 2' tall giant ragweed growing up about 20' off the path.  Making my way over, I found this beautiful, fluffy feather...perhaps from a heron?  I've seen a great blue flying around lately.  I love how the feather was lying on top of the plants, totally supported, well above the ground. 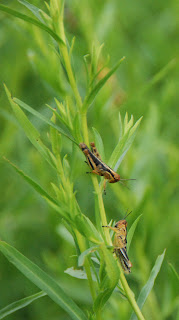 As I continued through the draw, I found myself going through a pocket of grasshoppers.  The grasshopper nymphs are incredibly abundant this year - not surprising, given how huge a population of grasshoppers we had last fall.  Some areas seem even fuller than other areas, though, and the large clump of panicled aster in the draw seemed to be sporting 2 or more grasshoppers per stem, rather like living (although not particularly attractive) flowers.  I can only hope we get enough rain for the plants to outgrow all the upcoming grasshopper damage...or that some predators are growing up, too, to take advantage of all this extra protein being produced in the yard.


Beyond the draw, I came through my main patch of smooth milkweed and looked carefully at many of the plants, hoping for a monarch caterpillar or two.  Alas, I didn't find any of those yesterday, but I did delight in the relatively large number of blooms this area is sporting this year.  I seem to find monarch caterpillars on these plants quite often in the late summer and fall, though, so I'm just thinking they are tastier then, if not quite as attractive.


I took one of my only landscape shots at this point, so you can see what this area just beyond the draw (but before the Back 5 Acres) looks like.  Nicknamed the Cedar Grove, we haven't burned it since moving in because of the proximity to the wooded area of the draw and because of the large number of big cedars in it.  So far we've been too nervous about containing the fire in this section.  There is a lot of brome and Bermuda grass here, but also a nice big patch of prairie rose, and the highest number of Baptisia plants (both blue and cream).  It's an area with an odd mix of "sacred and profane."

This is a good spot to break, so I think I'll continue sharing my walkabout in a second post to keep this one from becoming as long as a book.  More later.
Posted by Gaia Gardener: at 6:34 PM

I can hear the songbirds and smell the fragrances from here. Thanks for the tour.

I am intrigued by your comment in mine, i replied there. So i looked at your profile description and am amused when you said you are "perennially questing", as i am like that too! No wonder because you are a biologist-gardener.

And we have here Ruellia tuberosa, with blue flower http://abagillon.blogspot.com/2011/11/blooming-roadsides.html
Did you notice that deep blues and dark purples are not common in the hot tropics like in temperate climes? I wonder why, and still unanswered. Maybe you know!

Andrea, I can't believe how similar your Ruellia tuberosa is to our Ruellia humilis! And I love the photos of your roadsides cloaked in cracker plant! That definitely makes me want to try to get some into my garden.

I wonder if the blue color simply doesn't hold up well in the hot, bright light? We have blue flowers here, but most are either spring bloomers or shade plants, especially among the natives.

I replied to your reply in your blog - I'm definitely interested in learning more about the changes you've been noting.

Greg, thanks, as always, for stopping by!

Nice landscape shot at the end. You do a great job of knowing the wildflower names. I need to try to identify them better. I'm learning slowly that some of the names I was told as a child are wrong! Ha!

Loved your walkabout!! Thanks so much for the great KS wildflower ID site. .I was finally able to ID all the plants we found in the pasture last weekend. .It seemed more helpful than the book I had!! I agree that the common names are many. .part of the problem I was running into was that the same plant was called several different names. .and I couldn't compare them well because they were called something else. Do you know if a person can transplant baptisia and get it to live. .or is it a deep tap rooted beast that would die?

Melanie, You've given me a boost just when I needed it. I was wondering if my walkabout posts were just boring people and I was having a hard time finishing up with the rest of the bloom and insect lineup. I will persevere!

As far as Baptisia goes, I definitely wouldn't try to transplant it. You can get small starts from various places like High Country Gardens. Dyck Arboretum in Hesston almost always has it at their plant sales too. (If you haven't been to one of their sales, you ought to try to make a trip this way at a time you can check that out.) Baptisia is getting to be popular enough that I'm even occasionally seeing it at regular nurseries.