This limestone slab has been fascinating me for the last month or so. We've had it for over a year now, but it had such a blandly smooth surface that I've had a hard time figuring out what to do with it in the garden. It seemed so characterless and unnatural. 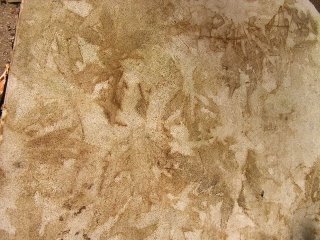 Now, however, the falling leaves have literally left their mark on it and it has morphed, almost overnight, from a blank spot to a daily changing canvas of impressions. 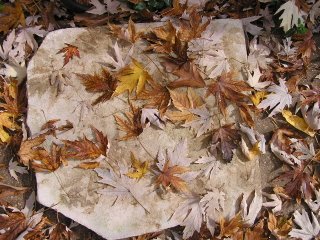 My biggest frustration at this point is how to capture it most effectively in a photograph. Lighting and shadows, changing displays of leaves coating its surface, and naturally evolving tannin prints all create its appeal to me. To a great extent, though, it's the fleeting nature of those patterns that fascinates me and, in trying to photograph them, I destroy that very nature that speaks to me.

Whether I ever get the photograph that I want, I now feel that having this blank canvas in the garden is a big plus. In its own way, it's the classic monk's begging bowl - highlighting the day's or the season's offerings.